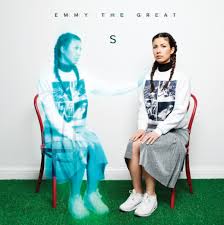 In advance of her next album, London-based singer-songwriter Emmy The Great releases the 4-song S EP, catching her at a transitional point in her career. Emmy’s 2009 debut First Love and 2011’s Virtue had her gazing inward with her lyrics, but this mode of reflection has recently widened to include the world around her. This change is due to Emmy’s globe-trotting gigs over the past couple of years, where her previously sheltered view has now shifted towards the bright lights, big cities and technical innovations of the modern world.

The concept of how technology and material wealth divert us from real life runs throughout the EP. Emmy brings up salient issues; how we interact with one another and how we (dis)connect through the use of technology. Look no further than the EP cover, with a hologram of Emmy sitting next to her real self, to get a visual sense of Emmy’s outlook. The official video for the first single “Swimming Pool” also shows the dual existence of the virtual and real Emmy, and the possible limitations manifested by an artificial being.

Emmy has always been a lyricist first and foremost, with her music being the means of getting her themes across. She could easily write poetry or prose instead (she is a contributing writer to Noisey and The Guardian). That being said, Emmy’s astute observations on society and relationships do take further flight on S because of her engaging vocal delivery. She flits lightly over some words, while landing directly on others. At times she warbles sweetly through a word, extending it over several intervals, or doubles her vocal lines for extra impact.

If there is any letdown, it’s in the structural arrangement of and instrumentation on the songs. Sustained ambient keys and the absence of a drum beat create a spacious, but slow-moving atmosphere that supports Emmy’s words, but doesn’t make for a thrilling listening experience. This is music to muse over, preferably alone with the lights turned low; it’s not for the dancefloor or the exercise bike. While there’s nothing wrong with this in theory, Emmy puts it into practice by crafting some awkward stylistic transitions and employing odd sonics for certain songs.

The opening track “Swimming Pool” treads aurally with a backdrop of sustained organs, trilling, harp-like ripples, and sporadic clacking notes that increase over time. It deepens midway with the introduction of guest vocals from Tom Fleming of Wild Beasts. His smoky, laid-back tones shadow Emmy’s vocal lines as she sings plaintively about wanting a rich kid’s “sunshine…tanlines… good time…”, and how her life has opened up since she met him. But has it? Will she remember him or his possessions, like that blue swimming pool?

The lyrically-on-point “Social Halo” tackles the divide between an individual’s social media-driven persona and their real self. An in-person encounter in SoHo with a guy and his friends leaves her to wonder if she was being laughed at because she’s unsure of herself in the presence of other people. Emmy reveals she’s “losing her social halo” amid quirky synth clicks, cycles of chiming guitar, and simmering guitar skeins.

“Solar Panels” is the sonic centerpiece of the EP and while some of it works, some of it doesn’t – or at least not as a complete, smoothly flowing entity. The song is composed of stylistically disjointed parts; there are the plain clips that focus on Emmy’s more direct vocal delivery; the uplifting, faster-pace techno bits; the sing-talking segment halfway through the track; the guitar break with a piercing guitar line that gets pushed off into the distance. There doesn’t seem to be any connection between these parts, and while each one is interesting in its own right, the overall effect is stilted.

The EP ends with “Somerset (I Can’t Get Over)”, a hushed elegy of sorts, as Emmy sings against a windswept sound made up of slightly wavering organ notes and rising and falling distorted guitars. An occasional metallic clinking breaks its contemplative mood. There’s also the strange fact that the lyrics are not technologically-oriented like the other songs on the EP. Emmy sings wistfully about someone who she’s involved with who seeks safety and escape from reality in books (F. Scott Fitzgerald and Tennessee Williams, to name two). She feels that she’s set him free, but she still worries and pleads with him: “please don’t get over me.”