An in-between-album EP is always a curious endeavor. It’s rarely obligatory, and is typically less promoted than an album, so why not sit on your tracks and wait until you have a long player’s worth? In the case of The Planet, the new mini-album by New York synthpop duo Young Ejecta (formerly simply Ejecta), it could be because of an urge to get out these songs, all of which have a general theme of heartbreak and loss, but it also might just be for the sake of getting a release behind their new name change.

The group’s 2013 debut placed them in a heavily populated pool of chilly synth pop, and despite their inherently generic sound, the EP starts them out well enough. “Into Your Heart” is a calming, plinky tune, that has a promising rise, and “Welcome to Love” has the best hook of the set, with frontwoman Leanne Macomber providing her own call-and-response vocals. The pinging back and forth between “Once was enough” and “I’m such an idiot” exemplifies the second guessing thoughts one has at the end of a breakup, although Macomber’s vocalization tends to be a bit vacant. The lines, “Forgot some things at your house/Forgot to phone my mother/I bet that you are night/Right about to fuck her,” reads like “You Oughta Know” sung by Caroline Polachek stuck in her upper range.

Overall though, the record’s first side is strong – it’s the other half that feels a bit short on fully formed ideas. “Recluse” sounds as if three song fragments were stitched together consecutively. “Your Planet” has a lot of great sounds, but also feels as if it were a studio keyboard jam made by the group’s sound architect Joel Ford, that was left as is. It’s fine, but it’s bothersome to think that it could have been used for something better. Closing number “What You Done” steps over similar lyrical terrain as the rest of the record, but is a stiff track that rides “Welcome to Love”’s vibe without any of its lush takeaways.

What we’re left with on The Planet is a six-song EP that maybe should have just been a standalone single. The duo may have had an urge to get these tracks out, but it’s not clear as to why. The piece as a whole is short enough to not be bothersome and there are some genuinely decent moments, but despite the brevity, this is a record that feels oddly rushed. 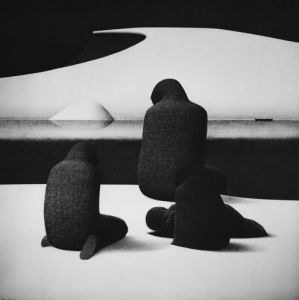