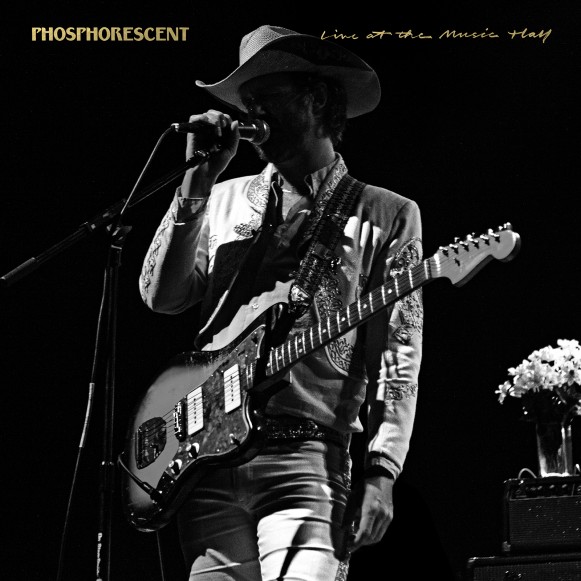 Live at the Music Hall

Matthew Houck, the singer-songwriter behind Phosphorescent, has been crafting electro-alt-folk/Americana albums since 2003, releasing six studio albums, an EP, and now Live at the Music Hall, a sonic documentation of Phosphorescent’s live performances. Live at the Music Hall is a triple album comprised of 19 songs that were culled from recordings of Phosphorescent’s four-night run of shows at the Music Hall Of Williamsburg in Brooklyn at the end of December 2013. The songs represented on the three-album set were whittled down from 10 hours of live recordings and include full-band numbers as well as solo presentations. Matthew’s objective is to showcase how his songs have evolved over the years of playing them onstage. He explores how his songs have transformed over time from what is represented on his studio albums.

The live line-up for Live at the Music Hall is composed of Matthew, Ricky Ray Jackson on guitar and pedal steel, pianist Scott Stapleton, Christopher Marine on drums, bassist Rustine Bragaw, percussionist David Torch, Jo Schornikow on organ and keys, and two added strings players. A majority of the 19 songs come from Matthew’s much-lauded prior album, Muchacho, while four songs from his Dead Oceans label debut Pride make the cut. The remaining tracks were selected from 2010’s Here’s to Taking It Easy and 2005’s Aw Come Aw Wry.

While it’s not essential to have heard these songs in their original studio-produced form, it is more elucidating and enjoyable to hear how the passage of time and the live setting have reshaped Matthew’s songs into, on the whole, more communal and engaging entities. For the Phosphorescent novice, here is a brief background on Matthew’s main studio albums:

Aw Come Aw Wry finds Matthew’s voice in fresh and lively fettle as he twists and squeezes his words out directly into the mic. The album’s production is clear with lean and crisp instrumental arrangements and electronics touches. The solemn prairie tunes of Pride, with their back porch-at-dusk aura, display an understated Matthew gently but plaintively singing amid old-time country instruments and choral vocal harmonies. Here’s to Taking It Easy emphasizes electric and lap steel guitars, piano, and drums while exuding a 1970’s laid-back California vibe. Matthew’s vocals are still contemplative, but have a smoother, more rejuvenated quality than on Pride.

After the carefree, burnished-sunset twang of Here’s to Taking It Easy, it looks like love and heartbreak did a number on Matthew and he hadn’t fully recovered by the time production on Muchacho rolled around. The album’s lyrics were written in the emotional aftermath of his relationship’s dissolution and it shows – most notably in the telling line from the ex-flame that “You’ll spin your heartache into gold” from “Down To Go” – and also in Matthew’s crestfallen and wearily aching (and way too echoed) vocal tone. Most songs tread with a painstakingly slow and steady pace and aren’t meant for the impatient ear. Instrumentally, rustic country instruments mingle with old-time piano, pedal steel, brass, and strings.

Live at the Music Hall, on the other hand, captivates from the get-go. It captures the animated musicians performing before an appreciative audience who whoop and clap through the dawning, vocally harmonic slide of intro “Sun, Arise! (An Invocation, An Introduction)”. That leads into the bittersweet “A New Anhedonia” and the alt-Western “Terror In The Canyons (The Wounded Master)”, replete with its odd tocking beat that marked the original. Organ notes also surge through the song, but the piano, violins, and horns have all gone missing. Matthew’s vocals are a bit thin on “A New Anhedonia”, but on “Terror In The Canyons (The Wounded Master)” he sings forcefully, ripping through not one, but two loud, raw, and ragged extended shouts. His vocals on the Muchacho –era songs also improve upon the studio album because they are stripped of their annoying echoed effects.

Tambourine jangle replaces spur jingle on the eight-minute opus “The Quotidian Beasts” while organ notes nearly drown out the tune. Matthew garnishes his vocals with little hiccupping whoops at the ends of his phrases amid charging guitars and piano. There’s an infectious energy sparking in the music hall and it’s easy to get caught up in the rhythmic and enthusiastic ruckus.

“Nothing was Stolen (Love Me Foolishly)” is played at a faster pace than on the original and is more straightforward with its propulsive beat, vocal twang, and spotlights of Jo on organ and Scott on piano. While Matthew’s vocals are not in top form for “Dead Heart”, sonically the song is a winner, whipping up a rock guitar churn and anchored by a furtive groove and subtle organ notes that don’t appear on the original.

“Down To Go” employs a simpler sound and steady pace with pedal steel and Matthew’s vocals placed front ‘n’ center. His rueful vocal tone here compares to Tom Petty, while on the original he has more of Willie Nelson-like vocal tremor. Piano and organ notes and accompanying vocals (but no horns) round out the sonic mix. The acclaimed “Song For Zula” gets a big response from the audience and this live version doesn’t stray too far from the studio creation. Seesawing strings and an echoed reverb beat form the bed in which Matthew lays down his plaintive vocals. The pace is a bit faster than the original song and pedal steel is also introduced to the live take.

A delightful highlight of the lengthy album is the fancy free “Ride On / Right On” and it’s the most changed song in Phosphorescent’s repertoire. The spur-jingle tempo invigorates as psych-rock guitar lines take center stage amid Matthew’s entertainingly loose, hiccupping whoops. “Wolves” figures twice on the album; once in solo form and once with the full band. The solo outing lasts an excessive 10 minutes and is filled with looped dissonant vocals. Matthew tries his best to howl at the moon, but the result is stridently overbearing. The audience claps eagerly at this cacophonous mifire, maybe in the hopes of ending the song sooner! The six-minute, full-band version of “Wolves”, however, is a hit with its cornucopia of organ and piano notes, emphatically-struck drums, pedal steel lines, and Matthew’s more flexible vocal inflection.

The epic “Los Angeles”, a highlight from Here’s to Taking It Easy, receives the grand treatment live, clocking in at over 10 minutes and alternating between calm lulls of Matthew’s wistfully building vocals and sweeping, powerful sections filled with choral vocals and Matthew’s hoarse exhortations. Many instruments are used throughout the tune, from drum and cymbals crash and tambourine shake to intense electric guitar lines and organ dramatics. The album ends on a fiery note with the deep piano strikes, funeral organ runs, dynamic drum-work, and distorted guitar turmoil of “At Death, A Proclamation”.