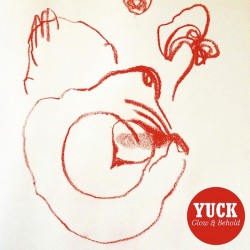 In April, Yuck announced a major departure in their lineup: frontman Daniel Blumberg left to focus on “other things”, which resulted in him starting a new group called Hebronix. Glow and Behold is Yuck’s sophmore record, and marks their first album with cofounder Max Bloom at the helm. For most bands, continuing under the same name with such a radical change would be a questionable decision. Thankfully, Glow and Behold manages to not only retain what made their self-titled debut so catchy, but also improve on its faults.

“Sunrise in Maple Shade” opens the record, a brief instrumental that resembles a number of musical passages found on classic-era shoegaze albums. Towards the end of the track, a group of horns enter, acting as a sort of fanfare for the album’s first song “Out of Time”. This track is a good indication of the direction Bloom has taken without his former writing partner: a sense of newfound melodicism, completely removed from the grungier qualities of their debut. The influence of the early 90s is still present, but whatever traces of Dinosaur Jr. existed have been replaced by Teenage Fanclub and The Pastels. The songs largely come across as optimistic, a major change from the previous release.

One of the greatest feats that Glow and Behold accomplishes is the superb interplay between the instruments and vocals. On “Lose My Breath”, something as simple as a guitar line mirroring a vocal melody carries the song to new heights, turning it into a joyous anthem. “Nothing New” introduces a slew of classic pop tricks: organ, handclaps, and trumpets. Tried and true they may be, but they are a welcome surprise to anyone anticipating a typical guitar/bass/drums formula.

In addition to the strong melodies, it is these flourishes that will help Glow and Behold transcend the staggering number of 90s clones that have appeared over the past few years. With their new lineup, Yuck draw influence from some of the best pop songwriters of the previous decade, and they do it without sounding derivative or lazy.