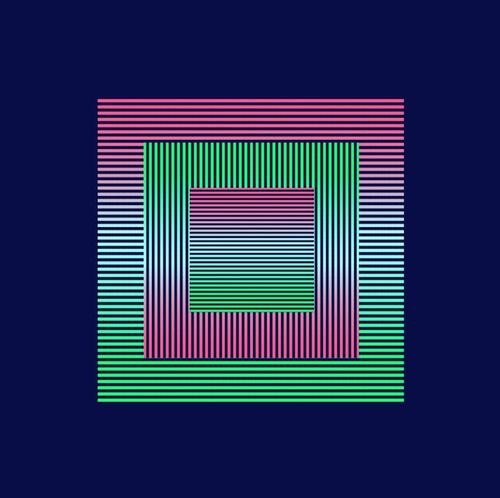 Montreal based band Young Galaxy are to release their fourth LP Ultramarine this April, and with an bright blue album cover and electronic, poppy sound to match. Like 2011’s Shapeshifting, Ultramarine was made with electronic producer Dan Lissvik (Studio), but this time it was made in Gothenburg, Sweden, at Lissvik’s studio.

Originally from the Vancouver area, Young Galaxy are Catherine McCandless, Stephen Ramsay, Stephen Kamp, Matthew Shapiro and Andrea Silver. They make shining, dreamy, electronic pop music. Of their latest release McCandless says; “In being away from home we felt like we could risk more…take bigger chances. Things we didn’t think would work, we tried anyway.”

Opening track “Pretty Boy” is a building, electronic track with whimsical vocals laid over top for contrast, a slow starter, but it works. “Fall For You” is a more jumpy, vibrant tune; McCandless sings at the chorus; “Hey, oh, when you need a guide I’ll light the way. Hey, oh, the beat is yours so let it play”. The synth towards the end has a metallic, vintage feel.

“Out the Gate Backwards” is about being directionless, McCandless tells; “I don’t know where I’ll go but I have no plans, out the gate backwards, no man’s land” she goes on to use the simile; “Outside I am diamond, inside I am plain, inside getting harder, outside washed away”. Piano keys feature alongside the guitar riffs.

“In Fire” is a more heavily electronic sounding track whist remaining meandering and pensive and the penultimate song “Privileged Poor” has an eighties sounding synth running throughout. Closing number “Sleepwalk With Me” showcases McCandless’ vocals at their best, taking on long notes and rolling melodies; “look here comes the sunlight, come sleepwalk with me” she belts out.

So although Ultramarine is more direct than previous records which were filled with more wistful, floaty tracks, Young Galaxy are still making music with a willfulness and an unfaltering autonomy.