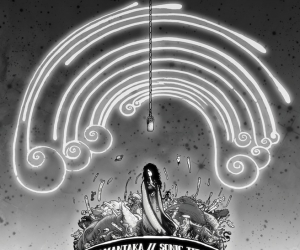 Montreal’s Yamantaka//Sonic Titan may have wooed Pitchfork in 2011 when the populist publication claimed that the band were the “latest torch-bearers for the city’s prog-and-proud tradition.” And while that may be true for 2011’s YT//ST, their latest contribution, UZU, while still impressive in its artistic indulgence, greatly disappoints where it counts.

Sure, Yamantaka//Sonic Titan have developed a very immersive and progressive sound, but each time lead singer Ruby Kato Atwood provides vocals on UZU I can’t help but think of my half-awake Catholic middle-school choir butchering psalms at mass. I get the attitude the band is going for, and instrumentally, the album is quite impressive, but whatever emotion or feeling that the band is attempting to convey vocally is just not coming through.

The rest of the album is just a hallucination-inducing mess with the slight exception of the final half of “One” where we get a hard-rocking breakdown coupled with screeching, and to be honest, unpleasant vocals. But those guitars are enough to make “One” bearable even for just a little bit. Otherwise, the album is haunting, but not because of its inherent spooky thematics, it’s haunting because it doesn’t work. Its elements don’t flow, instead they get in each other’s way, which helps no one, especially confused listeners.

And yes, I did enjoy the two “Seasickness” renditions in the middle of the album, but two songs does not a good album make. And they certainly don’t make up for the time I could have spent listening to something of more substance. Sure, it could be a pretty convincing halloween soundtrack, but otherwise UZU’s utility comes with a costly price tag: being underwhelming and genuinely unconvincing.