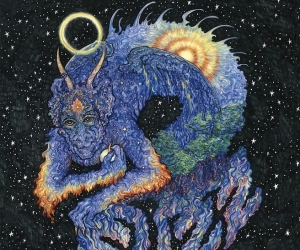 Fuzz is a dream come true for every 16-year-old boy experiencing the Great Rock Awakening, a band from another time. It’s difficult to compare Fuzz to anything else current, because they aren’t truly connected to any contemporary genre-mates. Rumour has it that Ty Segall doesn’t even own a CD player. He and his bandmates are channelling a sound and a way of life made famous by bands like Black Sabbath and Hawkwind, and thankfully, they do it like pros.

Ty Segall is a musician who inspires extreme devotion in his fans. The Californian, having barely crossed the mid 20’s threshold, has a back catalogue deep enough to give new listeners pause. If Fuzz were to be your starting point, it would not be an entirely logical fit, as it is more genre-locked than Segall’s other outings. Fuzz started as a side-project of Segall’s with Ty Segall Band guitarist Charlie Moothart, something the two of them ripped at in the basement every now and again between endless tour dates to get the lead out.

With Fuzz shifted to the front-burner (Segall released three records in 2012 and claimed he would be taking a break in 2013, which the release of ‘Sleeper’ contradicts), Segall and Moothart enlisted former Epsilons bandmate Roland Cosio on bass and put together a record that is driving from start to finish and which feels deeply rooted in another time and place. Cosio has since been replaced by bassist Chad Ubovich (of Chad and the Meatbodies), but the power trio set-up remains the band’s essence.

Album opener “Earthen Gate” starts out dreamily enough, meandering along on gently strummed and drummed mode until just shy of the 2-minute-mark, at which point the band cranks up the amplification, steps on a fuzz pedal or two, and gets their deeply groovy gnarl on. Lodged behind the drum kit, Segall looks after vocal duties for most of the album, revisiting favourite topics like conspiracy, paranoia, and all things “head/mind/brain” related. Listening to Segall shout that “human race/has no place/I’m sad to say/in future days” on the first track reinforces the notion that this type of music is, despite its dirgy vibe, about aggression and frustration at heart.

The direction that the Ty Segall Band was experimenting with on last year’s Slaughterhouse, the sound of everything coming together in one live take, is pushed up a notch here. Moothart is given the chance to show off his lead guitar inclinations, always aggressive, repetitive yet somehow highly varied. Moothart takes one turn on vocals on “Raise” and follows Segall’s pattern to a tee, with just a slightly more gravel-ravaged voice. Hopefully Moothart will take the reins more often on future Fuzz tracks (if this is not a one-off project), as his voice actually meshes best with the band’s sound.

As a whole, this album is a very gratifying listen, as it forms a cohesive boogie barrage – the three musicians clearly know each other backwards and forwards and bring that to the jam floor. Concerts will no doubt be off the hook. With only one previously released track on here, “Sleigh Ride”, avid collectors of all things Ty Segall will not be disappointed, and the same can be said for new fans of Fuzz, young and old.