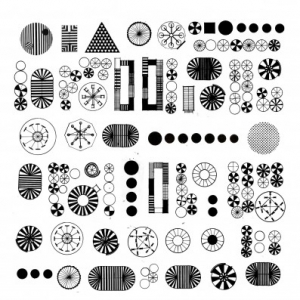 Join The Dots is a fitting moniker for Toy’s sophomore release which has dropped just over a year after their eponymous debut LP. The record’s a wash of noisy psyche rock with touches of ambient undertones that invoke the eclectic mix of The Horrors, Spiritualized, Tame Impala, Joy Division and The Stone Roses playing a game of swap the band member to forge the sonics of psychedelia, post-punk, elements of baggy and copious amounts of squalling static.

The London quintet’s latest swirl of aural mind-bending locates the band pushing themselves into the outer-reaches of rock ‘n’ roll where only darkness and noise exist. Join The Dots is a record that trades-in the colourful rainbow associated with psychedelia for something that hides in the shadows draped in monochrome, equally the warmth normally tied in with Toy’s music genre of choice is substituted for something altogether glacial and stark. ‘Frozen Atmosphere’ confirms the group’s darker tendencies with a dreamy hue that crackles and whimpers whilst Tom Dougall’s voice slurs “only dream in monochrome” as if to stamp the collective’s anti-kaleidoscope vibes across the album’s DNA. Such gloomy notions doesn’t mean the record is impenetrable, far from it, the darker the track the more engrossing is Join The Dots trump card, opening instrumental ‘Conductor’ shifts into view with a celestial chime before descending into a clatter of motorik beats and tense retro-futuristic instrumentation as if to document the future vision of an extinct generation. The title track keeps the volume levels high and the pedal to the metal with a vignette constructed around supremo aural manipulation.

Toy’s second LP is at its strength when powering at full throttle, when the noise limits are being pushed, Join The Dots is a menacing beast. This notion also goes hand in hand with the Londoners careering in full instrumental mode, not to discredit Dougall’s vocal but it’s not uncommon for the frontman’s voice to dampen and confine the unit’s searing maelstrom. It’s only on the record’s title track does the vocalist sound at his most assertive as opposed to being lost amongst the meandering fug of less punchy tracks ‘You Won’t Be The Same’ and ‘Endlessly’. There’s an element of freedom when Toy are wordless but rolling out an ever evolving carpet of sound that captures the London band in engrossing form.

It might take a little longer to accomplish but Join The Dots acts as a murky, loud conduit between indie rock’s lesser trodden footpath.