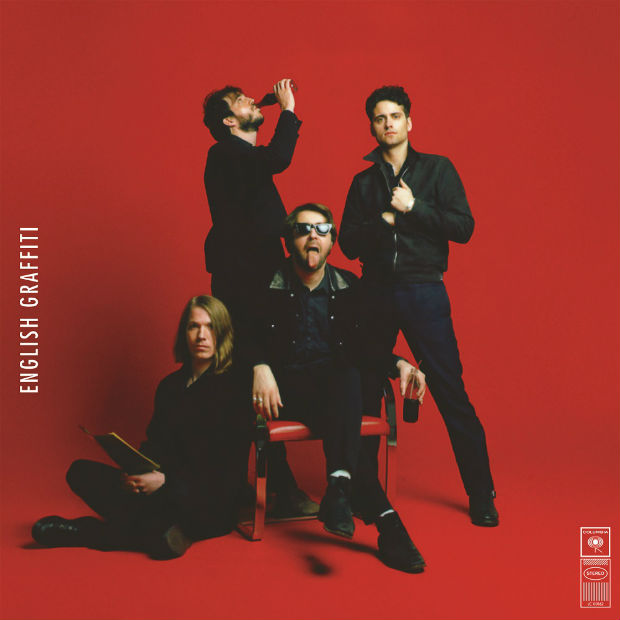 On their second LP, The Vaccines grew up too quickly, the straight forward rock ‘n’ roll sound of ‘Come of Age’ felt too mature, it’s an album that the quartet should have unveiled in four maybe five records time. Debut LP ‘What Did You Expect From The Vaccines?’ was a scrappy affair and one of youthful exuberance – ‘Come of Age’ was all too self-aware, akin to a first day at university, buckling under the pressure of being a grown up. For third LP ‘English Graffiti’ the gang have opted to wipe the slate clean and in doing so reinstalled a rampant vigour for the album. It’s a wonder they didn’t bestow the moniker of “You Didn’t Expect This From The Vaccines!” instead of a title mimicking street art from good ol’ Blighty.

“With our next album we wanted to make something that sounds amazing next year and then terrible in 10 years” Vaccines frontman Justin Young told NME at the beginning of the year. In a time of instant this and disposable that – such a statement makes sense. Instead of focusing on sounding timeless or the past or the future, The Vaccines are gunning for the here and now. Such urgency bleeds into ‘English Graffiti’ and with producers Dave Friddman and Cole MGN at the helm, a new exciting sound has been born; it’s sonically familiar but at the same time fresh and rejuvenated.

Lead single ‘Handsome’ kicks off ‘English Graffiti’ and it’s evident from the hyper-charged 100mph rock ‘n’ roll hurtling at you – The Vaccines have souped-up their ramshackle indie to something electrified and vibrant once again. The sound of “amazing this year and terrible in 10 years” can be heard in Pete Robertson’s manic drumming, like a malfunctioning Duracell bunny bashing a biscuit tin at gunpoint. ‘20/20’ is another number that is fuelled by wild urgency, the track’s chorus “I’m through thinking about you” is begging to be yelled back by a field of sunburnt revellers at this summer’s festivals; a classic in the making. The unruly trinity of berzerkoid is completed by a barrage of relentless energy found coursing through ‘Radio Bikini’s veins.

Over time The Vaccines have become synonymous with rabble-rousing anthems but it’s when they expose their fleshy underbelly on ‘English Graffiti’ do the real surprises peak out amongst the sugar coated chaos. ‘Maybe I Could Hold You’ is a swooning ditty with Young crooning “what is history?/and what is in the future?/does it matter now?/I’m not convinced it does you know?” over atmospheric guitar wafts and bold drumming. That lyric can be seen as a mission statement for the group’s latest outing, an ode to focussing on the present. Although, much of ‘English Graffiti’ harnesses on relationships and the sourer side of love. ‘(All Afternoon) In Love’ has Young and Co dial things down to subtle piano and winsome strings, where the vocalist mournfully declares he’s “fallen in love” before stating “you thought it over, and over again/And now you’re walking away”. Frustration bubbles over on ‘Denial’ where guitars crunch, drums fizzle and distort, with Young pleading “please don’t turn the light out/I don’t think the conversation’s over”. ‘Denial’ depicts a turbulent sequence of frazzled sentiments as it flits from dreamy soft centres to intensified crackled noise.

Gaudy in places, with a kitsch-like glint in its eye, ‘English Graffiti’ is a swirling mesh of emotions merged with beguiling textures and noises that typifies 2015 not 2025 nor 2005.