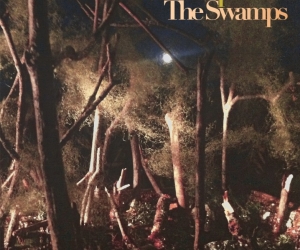 After touring extensively in support of their last full length Almanac, Brooklyn’s Widowspeak return with The Swamps. According to the press release, the album is meant to be a bridge between their last release and an as yet untitled new full-length album. While clocking in at a relatively short 20 minutes, the release follows a cohesive narrative that many EPs struggle to achieve.

The EP opens with the instrumental “Theme from The Swamps”, and it succeeds in living up to its title. It’s a trek through the wetlands that wouldn’t sound out of place on a Tom Waits or Dr. John record, with wordless vocals, bells and dulcimer surrounding murky, lo-fi percussive loops. The track is just brief enough to set the tone for the rest of the EP, which largely shares the same attitude with this track.

Enter “Smoke and Mirrors”. With an urgent gallop as a backbeat and cyclical guitars, it’s reminiscent of Spacemen 3 if they let some country influences creep into their music. One can picture the track as background music to a montage featuring a car chase. This song is one of the strongest on this release, and it serves to highlight what Widowspeak does best: implied genres without crossing over into the arena of pastiche or obvious self-awareness.

Another highlight is “Brass Bed”, a stunning country-tinged ballad where the subject lays in bed with a lover. The resolution of the song is vague, so it’s hard to determine whether it’s a love song or cautionary tale. Despite this conflict, the honesty shines through, and the song could cut through even the most cynical listener.

At times resembling a hazier Nancy & Lee, and others some of Phil Spector’s back catalogue, The Swamps manages to retain a feeling that is timeless. Anyone with an affinity for the dirtier side of pop music can use this release to tide themselves over until the next Widowspeak full length.