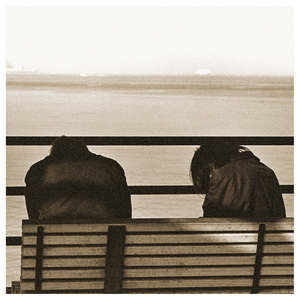 “A lot of things in everyday life drive me crazy; how we relate to each other; how politics, media, technology, money and medication influence our lives. This band, in a lot of ways, is an outlet”. These are the words of Alex Edkins, frontman for Toronto based noise-mongers METZ on how the outfit’s second album is an acerbic form of catharsis that channels everyday frustrations into their uncompromising hardcore punk scree. Following on from 2012’s self-titled debut, their sophomore offering is a further self-titled affair or more commonly known as ‘II’. The billing as a sequel fits like a glove; this is a record not unlike its predecessor, it’s a collection of songs heavily constructed around walls of uncompromising feedback drenched punk – akin to A Place To Bury Strangers and Black Flag embarking on a Battle Royale-esque fight to the death.

The theory behind the inception of ‘II’ was “if it ain’t broke, don’t fix it” which is an ironic statement, seeing as METZ sound perpetually malfunctioning, as if their instruments are having the final throws of life drained from them and their croaky death rattle is captured on tape to become a METZ tour de force. ‘II’ and the Canadian’s debut are to be enjoyed as a pair, they are bookends where fearsome punk rock rages with a fervent bloodlust. Volume is kept at an ear splitting level and the sheer mass of noise on offer mimics that of an industrial estate being torn down by rusty bulldozers. There are subtle differences on ‘II’ that illustrate progression; Edkins’ voice is now discernible over the waves of visceral punk, plus believe it or not, pockets of melody raise to the surface, albeit it giving more weight to the trio’s punishing onslaught. ‘II’ is darker and heavier but not as dense, the freed up voids of space allow tendrils of static to bleed out, fuelling the core of the LP’s guttural heart.

Those topics of frustration and anger fester on opening track ‘Acetate’ – “take/take away my dreams/I want you to take them away” howls Edkins with a vocal pitched somewhere between madman or someone who’s had their leg entangled in a bear trap. ’The Swimmer’ groans with a mechanical grind where the eventual punk rock bombast waits to ransack you – “you let me down/you let me down again” sneers Edkins with a tone more attuned for revenge than a wounded animal. Widespread carnage ensues on ‘Nervous System’ where you can feel every fibre of METZ’s onslaught leaping from the speakers. An astute use of feedback and static is applied to ‘IOU’ but it’s Edkins’ demonic growl that takes centre stage – with the trio’s noise indebted punk-rock buoying every bile absorbed word.

Present day gripes solidified into audio form and then spat out through an acidic embalmed noise filter, that’s ‘II’.