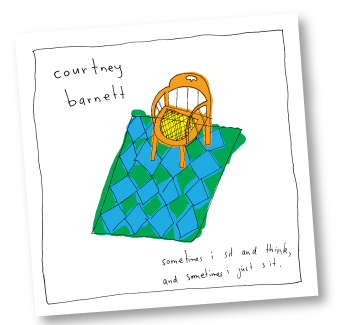 Courtney Barnett specializes in finding beauty in tedium. Nearly every song on Sometimes I Sit and Think, and Sometimes I Just Sit (the follow-up to 2013’s The Double EP: A Sea of Split Peas) finds the Australian songwriter dwelling on the mundane details of everyday life, her conversational vocal delivery belying the complexity of her dense rhyme schemes and humorous poetry.

The gently jangling “Depreston” is a particularly gripping example of Barnett’s talents, as the vocalist tells of a house-hunting expedition in the suburbs of her hometown of Melbourne. She enthuses about her new coffee percolator and mulls over the specifications of a potential new house, describing the garden and considering the storage potential of the two-car garage. But these observations fall by the wayside when she realizes that the house’s former owner had recently died, and she finds new significance in details like the handrail in the shower.

In captivating stories like this, the music is an afterthought, and Sometimes excels when Barnett and her backing band keep the emphasis on the words. The muscular rock riffs of “Pedestrian at Best” are a perfect match for the vocalist’s hilariously venomous rant, as she flings vitriol in every direction (most of all at herself) and she delivers a devastating zinger by sneering, “I think you’re a joke but I don’t find you very funny.”

“Dead Fox” is another moment of black comedy brilliance, as a peppy pop-rock stomp sets a misleadingly carefree backdrop for Barnett’s paranoid musings about pesticides, roadkill (which she calls “a possum Jackson Pollock [that] is painted on the tar”), and the fear that her hay fever sneezing fits might cause a car crash. Opener “Elevator Operator” is the album’s most fantastical offering, as a young man ditches his desk job and has a chance elevator run-in with an older woman that leads to a discussion about suicide. And while “Nobody Really Cares If You Don’t Go to the Party” and “Debbie Downer” aren’t lyrical highlights, their joyful choruses make them the catchiest tunes of the bunch.

Barnett misfires when she allows her wit to be overshadowed by repetition and gloomy jams. “Small Poppies” and “Kim’s Caravan” each clock it at around seven minutes, with dirge-like instrumentation that interrupts the collection’s vibrant flow.

Still, these blunders are easy to forgive when weighed against the dazzling triumphs of the LP’s other nine cuts. If any teachers out there are looking for a contemporary indie rock album that’s worth studying in an English literature classroom, Sometimes I Sit and Think, and Sometimes I Just Sit is it. 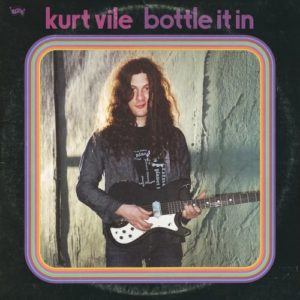 ‘Bottle It In’ Kurt Vile