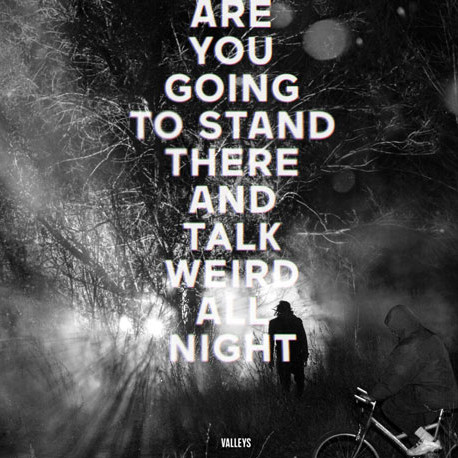 Are You Going To Stand There And Talk Weird All Night?

Being in a band used to be one of the coolest things that you could do with your life. If you were in a band you lived an insomniatic existence where you were not only on stage when you played music, but your life could be spread out on display in various media formats. The reasons one would play music weren’t always the same though and would range from lifestyle choice to personal expression. This trend went back and forth for awhile, but I believe we are currently in an age of introverted bands, as if there’s a gaping pit in their stomachs and playing music is the only cure. Valleys, a two piece haze pop band from Montreal are a band that typifies this, and while their latest album Are You Going To Stand There And Talk Weird All Night? is an airy endeavour it does provide a good rainy day soundtrack to contemplate all the introverted thoughts you’ve been having lately.

Marc St. Louis and Matilda Perks who make up Valleys found inspiration for the latest album from various personal losses they each experienced in their lives, so don’t expect a Beach Boys type album. You can however expect a Beach House type album that is quiet and soulful, but can also find uplifting moments floating above the murk. “Micromoving” starts the album off with a slow hum as you might expect, and far away dream vocals from St. Louis. The track doesn’t exactly grab one’s attention, but certainly sets a tone. “Hounds” follows with Perks at the lead vocals this time, an alternating pattern that continues throughout the album, and the slight mood shifts from baritone to the softer alto vocals lays a solid audio foundation for the album. “Absolutely Everything All the Time” is a breezy track with soft electronic rhythms and alternating vocals, but at this point early in the album, it’s becoming dangerously sleepy. Luckily enough “See the Moon?”, which might be the best track on the album, comes next with a perfect contemplative tone that combines a simple beat and sees St. Louis as the lead vocalist with Perks providing the airy background. A soaring guitar marks the end of each stanza, and keeps the song percolating on the edge of your senses. The short instrumental “Living Normal” bridges to “Us” another Perks led track that has a nice feel but floats around too much to be memorable. “John, Meet Me At the Precipice” brings St. Louis back, and I wonder if his vocals don’t suit the sound better, but I really like when Perks provides the vocal support especially when they sing the stanzas in tandem like they do here. “Before Fall” begins almost like a John Carpenter soundtrack, but that may be due to me going through his filmography over the past month, but it does give you the sense of the sometimes ominous lingerings that threaten to bring more gothic tones in.

Disappointment happens though when they never fully realize themselves, as “Exing Everything” feels too much like a forced happy ending. “Undream a Year” however does end the album strongly with electronic meditations on the questions of starting over, and actually has uplifting tones that is reaches, and at over 8 minutes the song is patient in finding its way around.

Making art as therapy is not an uncommon thing, in fact it seems lately that it’s becoming more of the norm for bands these days. Because the music industry is more artist driven, it’s making music more specialized, if you’re feeling a certain mood there’s most likely a band out there to fit the bill. Valleys are trying to fit the daydreaming niche market, and while they are successful at times in achieving this, they’ll need a little more seasoning and experience in order to creating a consistently hazy album.