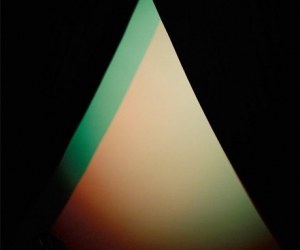 If there was niche for a female version of The Postal Service, electro pop duo The Blow would slot into that pigeonhole quite comfortably. Like The Postal Service, The Blow compromises of two bodies, Khaela Maricich (vocals) and Melissa Dyne (visuals/installation of conceptual art) and together they forge a synth led pop voyage that skirts around the outer reaches of contemporary R ‘n’ B and slices of mainstream pop but viewed and projected from a hipster point of view. The twosome have a sprawling past consisting of different collaborators and the fleeting romance of embracing performance art makes their latest, eponymous record, an experience to enjoy ironically. This is music for guys and gals who love Pitchfork, wear black rimmed spectacles with no glass in the frames and of course, love a soy latte in a bookshop.

The album commences promisingly in the guise of ‘Make It Up’, which is centered around a bounding beat that is accompanied by chopped up vocal ticks making for a sonic tapestry that continually evolves. The sample of panting adds a sensual layer of intrigue to the album’s opener and something Nelly Furtado would have pestered Timbaland to lay down at the turn of the 2000s. The recurring use of buoyant beats merged with R ‘n’ B tidbits continues with ‘From The Future’ that boasts a booming backbone that splinters with handclaps and finger clicks. Although ‘The Blow’ spews a plethora of beguiling elements of experimentation, the underlying feeling is that of repetition, all the squelches and electronic trickery don’t always equate to a song that burrows into your head or heart.

The pair’s album takes a tumble when it comes to Maricich’s vocal which is bereft of character; it’s almost spoken delivery projects a cold demeanor and something that is easily usurped by the aural pick ‘n’ mix swirling around her. ‘I Tell Myself Everything’ is where the ironic tendencies of The Blow ignite with a glaring flame, this nugget of abstract sounds and disjointed vocals feels like the unfinished cuts of when the duo we’re initially chucking around ideas akin to publishing the drafts of an autobiography before you’re ready to bear your soul. Nevertheless this misfire does contain a superbly self indulgent lyric of “They say you are what you eat/I’m starved for affection/I eat every eye ball in my direction”. ‘Like Girls’ flirting with sexual ambiguity falls flat with a sparse, non existent spectral bump ‘n’ hum that leaves Maricich’s tedious vocal exposed.

This is a record that neither blows nor sucks, it contains flourishes of excitement but ultimately ‘The Blow’ is pleasing non-entirety.