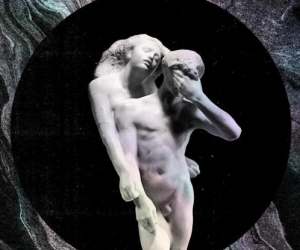 Reflektor is Arcade Fire’s fourth studio album. At this point, the group needs no introduction: they’re the biggest rock band in the world, have shared the stage with U2, and won a Grammy for Album Of The Year. These milestones are worth mentioning for two reasons: firstly, the album is produced by LCD Soundsystem’s James Murphy, and secondly, this is a double album. Where previous releases have been relatively modest, Reflektor sees the band embracing their new position as rock stars. The songs are enormous, and the album was backed by a substantial guerilla marketing campaign.

Reflektor opens with a 7-minute title track, featuring congas, an atypical disco beat and Arthur Russell disco-sax. The track also (briefly) features David Bowie singing backups on a bridge about halfway through the song, which is fitting: many of the ideas used on this album seem to be influenced by Scary Monsters-era Bowie. Perhaps the biggest departure on the album is “Flashbulb Eyes”. It’s Arcade Fire’s interpretation of classic, murky dub reggae. With heavy delay and laser beam sound effects, it’s a pretty convincing homage to the King Tubby/Lee Perry school of production.

Lest this review give the impression that Arcade Fire has done a complete 180, there are still many moments resembling their earlier albums. While the disco-influenced songs tend to be meditative and slow building, tracks like “We Exist” and “Here Comes The Night Time” are anthemic as anything on Funeral or Neon Bible: the crescendo on the latter song sees the band changing to a double-time tempo as a chorus chants chorus.

While many of the lyrics don’t have an obvious meaning, there are moments where Butler seems to be questioning his newfound fame and his place in the current musical climate. At the beginning of “Normal Person” he asks: “Do you like rock and roll music? Cause I don’t know if I do”. It’s the classic rock trope, but it’s hard to take Win seriously based on the direction they’ve taken on this record. “Flashbulb Eyes” could be interpreted as a critique on celebrity culture: “What did the camera really do? Take your soul? Hit me with your flashbulb eyes”. Whatever the band is trying to convey, it certainly doesn’t come through in the lyrics, and is the most disappointing factor of the record.

Reflektor is an admirable effort on the bands part to make a change and adjust to their newfound stardom, but it suffers from a few glaring problems (namely the length, and a lack of cohesion on a track by track basis). With some rearranging and skimming the tracks to a single LP, the record would be as classic as anything else the band has released, but ultimately the album falls a little short.