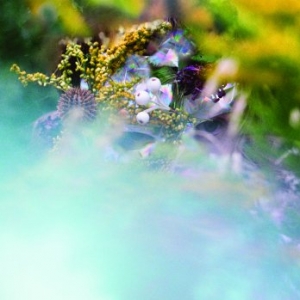 bEEdEEgEE is the alias of Brian DeGraw, an American musician and producer living in New York who is probably most well known as part of Gang Gang Dance but the album SUM/ONE will be his first solo release out on 4AD records. Written and recorded over the course of a year, Brian left New York for his Woodstock studio and recorded in a peaceful new environment. Audio sketches evolved into a project that became the LP and brings together deep synth with element of pop. Featuring the vocal talents of Alexis Taylor (Hot Chip), Lovefoxxx (CSS), Lizzi Bougatsos (Gang Gang Dance) and Douglas Armour the nine tracks are an array of dazzling soundscapes.

“Helium Anchor” opens with a calming statement which comes over a mix of breezy synth, piano and harp as the beat slowly kicks in, an effected English accent talks to the listener; “So at least to begin with I would recommend closing your eyes and simply allow the mind the body and the world to be exactly as they are for a moment without the slightest intention to change them or manipulate them in any way”.

“Like Rain Man” uses a scrabbling set of sounds with an eighties sounding synth and a surging melody, which rises and falls. “Empty Vases” is much more minimal sound wise, however vocals are brought in; “there’s a lock with no key, only water as far as the eye can see, I’m here waiting” the sound of crows cawing echoes against the words. “Overlook” sees a little help from Gang Gang Dance’s Lizzi Bougastsos and the whole song has a Gang Gang Dance feel to it- upbeat and slightly odd juxtaposition of vocals with sound effects.

“Time Of Waste (F.U.T.D)” uses more sound effects with animal noises at the intro before a steady beat and deep synth and Hot Chip’s Alexis Taylor and his recognizable vocals; “all I wanna do is fuck up the day, I started out late with nothing to say” not the most uplifting lyrics but the fell is experimental fun.

“Flowers” is a funky number with a great set of vocals and another experimental edge. “Interlude “(intellectual property)” is a quick crossover track containing a mix of laughter, whispers, sirens and white noise which is enough to space anyone out. Final track “Quantum Poet Riddim” closes the album with a rhythmic piece which is both heavy and introspective. It seems in SUM/ONE, DeGraw’s emphasis is on an extended electronic soundscape; it’s interesting and varied and sets the bar high for what more of bEEdEEgEE might sound like.