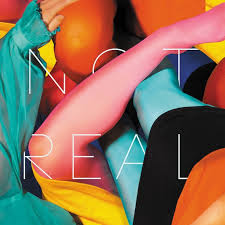 Stealing Sheep is the Liverpool-based trio of Rebecca Hawley, Emily Lansley and Lucy Mercer. The self proclaimed “unlikely triplets” released their debut album Into The Diamond Sun on Heavenly Records after a string of accalimed EPs. Featuring the inimitable mark of a group with three songwriters and influences ranging from The Pointer Sisters to Can, Diamond Sun was as strong an opening statement that any band could hope for. Since Diamond Sun’s release, the group have remained relatively quiet, until now: they return April 13th with their sophmore album Not Real, their first in three years.

One thing that becomes apparent from the start of Not Real is the expansion of Stealing Sheep’s musical palette. The album opens with “Sequence”, a track that builds around a Moroder-esque arpeggiated keyboard run, backed up by a robotic start/stop disco beat. Vocalists Hawley and Lansley are in top form, delivering harmonies that veer in unexpected directions on each new verse. The lyrics are oblique, which in turn makes them more relatable: “Could you up and leave now? Would you even know how if you wanted to?”.

When Stealing Sheep aren’t toying with heavily produced sample/keyboard based songs, they venture back into the rock territory that earned them so many fans on Diamond Sun. “This Time” is a laid-back, two chord stomper with nods to the simpler, introspective moments of The Velvet Underground or The Kinks. Volume wise, “Evolve And Expand” takes the opposite approach: it’s a scaled back voice-and-guitar only piece, ambient room sounds intact. Like the best songs on Diamond Sun, it bears resemblance to Mazzy Star at their most atmospheric. By keeping the songwriting circular and the instrumentation minimal on these guitar heavy tracks, the trio is free to explore the melodic possibilities offered by their voices. Hawley and co. run up and down scales, both solo and in three part harmonies. It is a testament to how well they work together as a group, and a clear sign that each member contributed equally to the album.

On Not Real, Stealing Sheep exit their comfort zone experimenting with new songwriting tactics and sounds, but always return to the familiar. It’s a record that will appeal to fans both old and new.