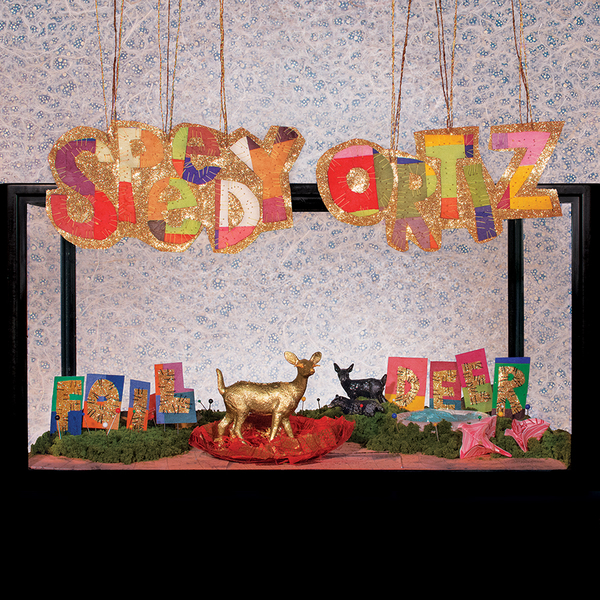 Northampton, MA based Speedy Ortiz began as the solo project of Sadie Dupuis, but have since transformed into a full-fledged band. After heavy stints of touring in support of 2013’s acclaimed Major Arcana, Dupuis spent time at her mother’s home in the woods of Connecticut to write songs that would eventually become their new album. On April 21st, Speedy Ortiz return with their third full-length, Foil Deer.

Speedy Ortiz functions as a cohesive unit, with heavy emphasis on ‘riffs’ as a baseline for melody. They float effortlessly between two sides of the early 90’s indie-rock boom: at times gentle and introspective, but just as easily jumping into unbridled aggression. The ghosts of fellow Bay Staters are present throughout Foil Dear: some of the ‘wrong’ notes found in Joey Santiago’s guitar work are there on many songs, and the fretwork on “Good Neck” sounds like a track from Doolittle with the tempo sliced in half. In keeping with the Pixies lineage, the ascending/descending riff on “Raising the Skate” could just as easily pass for a song penned by the Deal sisters circa Last Splash. With all this, it is completely unfair to reduce Speedy Ortiz to the sum of their influences, as there’s a lot more going on under the surface. For example: the occasional sound effects on “Neck”, or the abrupt rhythmic change as “Raising the Skate” jerks from straight time to triplets. Speedy Ortiz aren’t mining 90’s grunge or waxing nostalgic in any sense. Instead, they deconstruct the signifiers that surround the genre, distancing themselves from the slew of their contemporaries trying to emulate the past.

Dupuis’ background as a writer is obvious throughout Foil Deer (she recently finished an MFA in poetry), and her lyrics are more vivid and biting than ever. Take “The Graduates”, where Dupuis pens a brilliantly concise story in the first verse alone: “We were the French club dropouts, but we never got excused from class. The secretary must have been high, to turn a blind eye on us sneaking out back. Then we were pregnant on the balcony, and you caught me with a cigarette. I never put the thing on my lips, just crushed it and spit on where I lay it to rest”. Other standout lyrics include the self reflexive “Swell Content”, of which there are many highlights: “I’m not adverse to getting salt in my face, let me marinate a week and reevaulate”. Dupuis knows the importance of her words, both as a student of language and a female musician in a subgenre overpopulated with men. To quote Dupuis: “The rallying cries and aggression have fallen to queer performers, performers of color or women to pick up that mantle.”

Speedy Ortiz is a force to be reckoned with: great songwriting, socially conscious, urgent and insightful lyrics. All this is accomplished off without any sense of irony. With Dupuis at the helm, Foil Deer will be the album to pick up that mantle.

The Beths ‘Future Me Hates Me’