There’s a reason why most music tends to talk about the outer excesses of life. Rappers making money, glam rockers having copious amounts of sex are the simple examples, but then there’s “yacht rock” which was the soundtrack for the rich baby boomers living in the 70’s and 80’s. Bands like Vampire Weekend have brought that sound back, along with a band that is quite literally yacht rock in Tennis. Tennis are a married couple that formed after sailing the world for seven months. Songs about sitting around playing video games don’t really do well in the music world, which is why we live vicariously through artists who live on that edge for us. Tennis having two full length albums to their name have now released some of their best songs yet for a new album in their EP Small Sound.

The very first line in the first song “Mean Streets” is “Summer up in the Catskills baby.” Clearly this song is not going to be an homage to the gritty Scorcese film, but maybe about lounging around and watching it on a big screen TV. The song is actually just about playing songs on the street for fun. Wait, how is this about excess? They’re in the Catskills, a high end resort type area of New York that generally houses artists. They’re not scarfing for food, they’re on vacation just playing music for fun, and rather than sound dull, the song is actually uplifting and vibrant, it places their excess position on a pedestal as if to say “This is the life.” Now while it may be natural to be resentful of these two lovebirds, making them not the most sympathetic characters, this isn’t moviemaking though, this is music, and the sound is good. “Timothy” is an ode to its title character and coupled with the first song shows a new range for Tennis. Their first two albums may have been criticized for being too one-note, but that’s not the case here with songs that swing and sway like “Cured of Youth” which is actually pretty danceable. “Dimming Light” has the classic Tennis sound of slow surf guitars with haunting keyboards, but then the chorus breaks out into a bopping beat, it’s a delightful journey. “100 Lovers” ends the short 5 song EP about a Casanova, that reminds us that there really isn’t that much separation in theme between Tennis and say Lil Wayne right?

The five songs on the Small Sound EP are the best examples of what Tennis does best, and that’s create catchy pop songs about the lives the rest of us can’t lead. It’s not so much that we can’t lead them, it’s maybe that we don’t want to actually lead them, we just want to listen to a four minute pop song about that lifestyle. After touring their sailboat around the oceans, and now touring the world with their two albums, Tennis have finally found their sound. 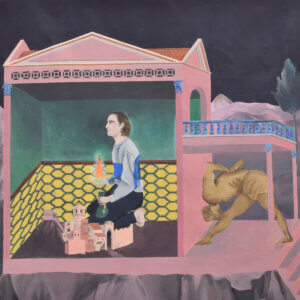