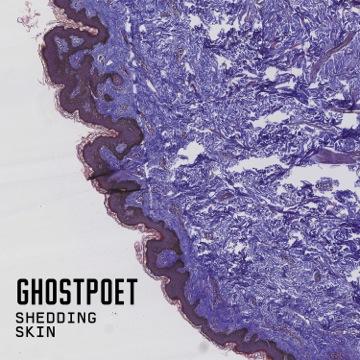 About a million miles away from rap’s gaudy obsessions with flash cars, bling, money and bitches, you’ll find Ghostpoet and his third LP Shedding Skin. Ghostpoet aka Obaro Ejimiwe, avoids all the trappings of hip hop’s saturated clichés with an album of melancholic observations and self-exploration. This is a record that reflects on life’s struggles, the stresses of relationships and all that comes with being a human being in 2015. Such mundane subject matters could be something of a dull affair but the Londoner’s delivery makes these everyday trappings relatable and with it, there’s an element of reassurance and catharsis in how Ejimiwe muses about the humdrum of the ordinary; “look life is hard/life is shifty/stretching pounds out/living nifty” while reflecting on “bills and tax and bailiffs” on opening track ‘Off Peak Dreams’.

A refreshing aspect to Ghostpoet and Shedding Skin is how English it is, and perhaps I’m biased as a writer from the UK but hearing Ejimiwe roll out colloquialisms like “bacon sarnies and cups of tea in a café“ and drawling the occasional “mate” gives the album an earthy charm. The Londoner’s vocal has a rich quality to it, pitched somewhere between slurred rap and slowed to a crawl singing. Sonically, Shedding Skin is buoyed by an organic soundtrack, where samples and machine-led beats have been usurped by a traditional band set up of drums, guitar and bass.

Being vulnerable is a string to Shedding Skin’s bow, whilst the baller lifestyle of a chain wearing, swag fiend is all well and good from a fantasy perspective, hearing someone chronicle the same hopes, struggles and fears of the 99% has a certain comfort to it. ‘Be Right Back, Moving House’ illustrates Ghostpoet’s thirst for trying to figure out this tangled ball of yarn we call life “I am sitting over here looking for the answers/one day at a time”. The album’s modus operandi is to shine a light of how tough things can be but there’s always a glimmer of optimism waiting to dissipate the realism. Closing track ‘Nothing In The Way’ caps off the record in a understated but optimistic fashion with subtle orchestral swoons mixing with poignant piano stabs, enveloping Ejimiwe as he announces “we all fall down/but when we get up/nothing in the world can stop us/is what I believe”.

Ghostpoet has shed his skin and in doing so, in such an exposing manner just typifies what a brave and humble artist he is.