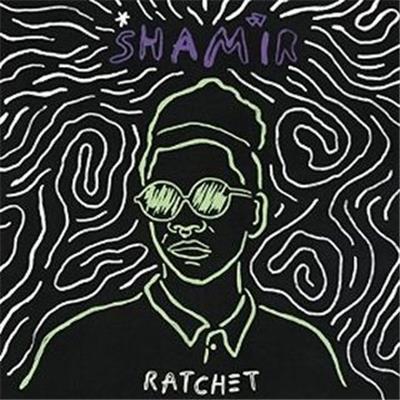 Shamir Bailey, going by the stage name of Shamir, is the Las Vegas-based dance-pop artist who made waves with his debut EP, Northtown, last year. He’s been on the fast track to fame since its release and on May 19th he drops his highly anticipated debut album, Ratchet, on XL Recordings. Northtown sported lean production values and spare instrumentation, but was packed with perceptive lyrics (like “We are slaves trapped inside our own fears” on “Sometimes A Man”) and displayed Shamir’s stylistic range as he ran through three dance-pop/house tunes, a poignant ballad, and an acoustic-pop number.

Nothing on Northtown, however, prepares for the lightyears leap to the colorful, upbeat pop culture bauble that is lead single “On The Regular”, which came out six months ago. It’s the 3rd song on Ratchet and Shamir lays it down for all the clowns that don’t get him and his music by rolling out laid-back ‘n’ flip quicksilver raps like “No multiple choice / ‘cause I’m the only answer” and, on a soulful break near the end of the song, “Step to me and you will be handled / See…that’s my crown on the mantle.” Shamir’s blend of cheeky to self-deprecating boasts, replete with casual cursing (“Five foot ten / about a buck twenty / skinny as a rod / but still won’t fuck with me”), are sprinkled with a fast-thumping beat, electro-notes, ring-a-ding-ding cowbell, and the occasional whip crack and extended synth line. Even though certain lyrical content is questionable (“Illy to the fullest / you can call me cancer” just does NOT sit well), it’s an aurally fun track – but it’s also a one-off. Nothing on the rest of Ratchet creates quite the racket that “On The Regular” does…

Second single and 4th song on the album, “Call It Off”, was released a couple months ago and it too is a dance-pop track, but Shamir’s dope lyrics and jam-packed rapping are relegated to the very end of the song. Instead, it’s a funkier number that mixes Shamir’s higher pitched croon (recalling a young Michael Jackson at certain moments) stating “It’s time to call it off” with a snap, crackle, and electro-pop backdrop. The result is rhythmically and vocally engaging, but a bit lyrically and musically repetitive, especially when measured against “On The Regular”.

Shamir also bowed the vocals-focused “Darker” at his official YouTube channel about a week ago and it reveals that he’s not just a brash (but with tongue in cheek), one-directional dance-pop darling. It’s the 2nd to last song on Ratchet and, like the more toned down songs on Northside, it spotlights Shamir’s serious side as extended synth lines and a marching beat lead to his plaintive, ponderous vocal delivery. Soft synths and what sounds like whirling helicopter blades are the only accompaniment as Shamir emotes through the lines “…our love we leave / is our legacy / So we’ll keep it alive / in our memory.”

Alluring album-opener “Vegas” starts proceedings off on a mellow, nocturnal tip with a slow-jam groove, buzzing electro notes, and Shamir sing-talking about his hometown in an anxious, hesitant tone to “Come and play / There’s no place you’d rather be / …at least at night.” Light cowbell notes make an appearance – and not for the last time. It’s a recurrent aural accoutrement that’s at first amusing, but then gets annoying when heard on almost every track of the album. Another repetitive effect is the use of deep-tone spoken word male vocals that sometimes shadow Shamir’s higher vocal register. Again, it’s interesting for a while, but gets irritating over the course of the whole album.

Next number “Make A Scene” is notable for its bleak, but realistic lyrics of “We’ve given up on all our dreams / so why not go out and make a scene?” propped against a fast-ticking beat and zipping, beeping, and siren video game-like notes, and, yes, some cowbell clank and deeper male spoken vocals. The instrumentally bouncy, strutting “In For The Kill” jazzes it up with vivid horn notes, a fat, buzzing beat and Shamir’s jaunty vocal phrasing (which is contrasted with his slightly downcast vocal tone). It’s a bright light amid the lower-key numbers and features a nimble Shamir cooing longingly and proclaiming expressively “Why can’t you see / I’m holding on desperately?”

Shamir’s airy, lithe vocals float and lilt sweetly over the up-tempo percolating percussion and clicking rhythms of “Youth” which belies the darker lyrical admission that “…we have no clue.” Last tune “Head In The Clouds” again references Shamir’s burgeoning popularity as he pipes matter-of-factly “Just wanna take this moment – it’s mine / and leave the past behind / Just wanna be great…” While the material on Ratchet is good, it’s not quite great. Shamir sets the bar high with the lyrically clever “On The Regular”, but the rest of the album’s tracks aren’t earth-shaking or ground-breaking. He’s going to have to craft more inventive, memorable, and instrumentally diverse tunes to give listeners that wow factor in order to secure his crown.