Despite the searing distortion and loud volumes typically associated with shoegaze, much of the genre’s music is fairly easy to digest. With dreamy melodies and dense, pillowy arrangements, it’s a style that typically favours sublime bliss over tension.

Montreal’s No Joy has long followed this well-trodden path with cloudy-headed soundscapes that are baked in summery warmth. We’ve heard evidence of this on the band’s lo-fi 2010 debut Ghost Blonde, and on the sonically sparkling (but still loud as hell) 2013 follow-up Wait to Pleasure. And although the new album More Faithful once again piles on the fuzz and reverb, it’s a step away from the blissed-out dreaminess that has sometimes made No Joy sound like just another shoegaze band.

Take, for example, opening cut “Remember Nothing.” Although the sonics are gorgeously hazy, the angular rhythms are chaotic and the chords rumble with harsh dissonance. The softly atmospheric guitar tones that emerge during the instrumental are so wobbly that they scarcely have a discernible pitch. The breathy, harmonized melodies are pretty, but these aren’t enough to alleviate the anxiousness of the track.

Although not all of More Faithful is quite that jarring, this introductory number sets the tone for an album that pushes No Joy’s shoegaze sound away from bleary beauty towards something a little more unsettling. “Moon in My Mouth” downplays distortion in favour of chiming, hypnotic riffs that sound permanently unresolved, while “Chalk Snake” breaks down with echoing psych textures. “Corpo Daemon” charges out of the gate with a blistering punk surge, and the acoustic strums and soft harmonies that enter during the refrains add to the uneasiness rather than alleviate it.

These tense tracks mean that the payoffs have a greater impact when they finally arrive. “Hollywood Teeth” is a sweetly jangling fuzz-pop number that, in a wonderful moment of stomach-flipping strangeness, gets momentarily sucked down a pitch-dropped rabbit hole at the 1:18 mark. And back-half highlight “Rude Films” rides a simple two-chord stomp to euphoria as overlapping harmonies unfurl into a sun-kissed crescendo.

From these songs, it’s clear that No Joy can still deliver a lovely slice of dream-pop — but it’s the moments when the dream becomes a nightmare than sets More Faithful apart. 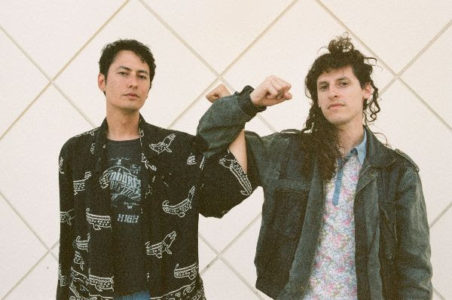