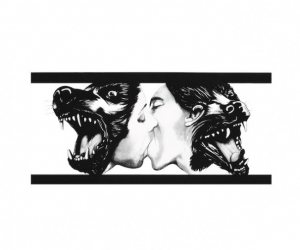 Finally! Finally we get a dance album that hits all the right funk receptors at all the right times. Holy Ghost! is back with their newest LP, “Dynamics,” and it’s making waves — you know, those waves with the perfect breaks that you dream of even if you can’t surf.

And if you’re a longtime Soulwax fan (like me, might I add), you’ll rejoice in the news that they’re keeping the electronic rock spirit alive. But you probably already knew that. And considering the fact that DFA has been churning out some of the best dance music of our generation, it’s not surprising that Holy Ghost! has just set the bar even higher.

So you might ask, why do people still listen to that mainstream EDM garbage? That’s a fantastic question that you don’t need to know the answer to, because we have people like Holy Ghost! to make it all bearable.

Of course, if you’re a rock ‘n’ roll purist, you’ll most certainly hate all the fun that this music makes you have. But hey, to each their own.

“Dynamics” is an 11-track album that starts out with something more reminiscent of the “Ferris Bueller’s Day Off” soundtrack than the making of an indie pop LP. And from beginning to end, the funk doesn’t let up. It comes in different interpretations, through different vocal intonations and custom synth settings. It’s an entire album filled with tracks that should make you want to shake your tail or — for the cool kids — head bob until it falls off your neck.

Did you say you needed some more Miami vice funk in your record collection? Look no further then “It Must Be The Weather.” Need a late-night driving anthem that will make your girlfriend happy? “I Wanna Be Your Hand” can make that happen. And if you’re looking for a high energy, dance floor smash hit, definitely bump “Bridge and Tunnel” through your speakers — high volumes come highly recommended.

Naturally, you may find yourself overwhelmed by the disco funk rhythms and shimmering melodies, well look no further than the lyricism present in nearly every track. But it’s the consistency that really speaks volumes of “Dynamics.” However, do not confuse this with redundancy. Sure, vintage disco funk pervades every aspect of this album, but Holy Ghost! does it in such a tasteful manner that whatever redundancy you may arrive at will be instantly forgiven.

“Dynamics” is an exceptional album that will certainly have the hipsters drooling. But it’s more than just a hipster album, it’s an album for people that like music that makes you fucking dance and actually feel something in the process. Don’t skip a beat on this one.