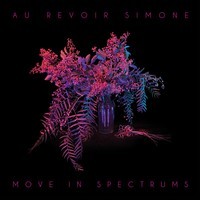 After receiving a substantial amount of critical and commercial praise for 2009’s Still Night, Still Light, Au Revoir Simone have been relatively quiet for the past few years. This is, presumably, because they were writing and recording the albums follow up (and their first new release in four years): Move In Spectrums. While the record shares much in common musically with their previous records Spectrums is  well-written enough to justify the wait between albums.

“Somebody Who” is the album’s first single, and it opens with a minimal electro-percussion loop, suggesting a reference to Tears For Fears or a number of other ‘intelligent-pop’ acts from the mid-to-late ‘80s. Instead of taking the obvious route and turning the song into an indistinguishable wash of synth pads, the track focuses on a simple melody and keyboard line to draw the listener in. The hooks are big, and the less-is-more approach works wonderfully.

The influence of New Wave/New Romanticism runs deep through each track on Move In Spectrums, revealing itself in different ways at every turn. Album opener “More Than” could be a Modern English or Psychedelic Furs demo, which is not meant as an insult; as with “Somebody Who”, the beauty lies in its minimalism and avoidance of the glossy sheen that makes many other retro-minded acts boring.

Another high point on the album comes on “Crazy”, a song that is comparatively out of step with the rest of the album. It’s nearly twice the tempo of every other track, with anthemic lyrics about growing up and walking away from your problems. It’s very likely that this track will see a release as the second single, and is by and large the catchiest song on the album.

“Love You Don’t Know Me”, “Hand Over Hand”, and “Let The Night Win” close out the record on a somber note, introducing some of the colder elements of 80’s goth/4AD acts. With all of the references made here, one would be quick to place Au Revoir Simone in the same box as the hundreds of other vintage synth-wielding acts that pop up every year, but the songs on Spectrums are strong enough to rise above the rest.