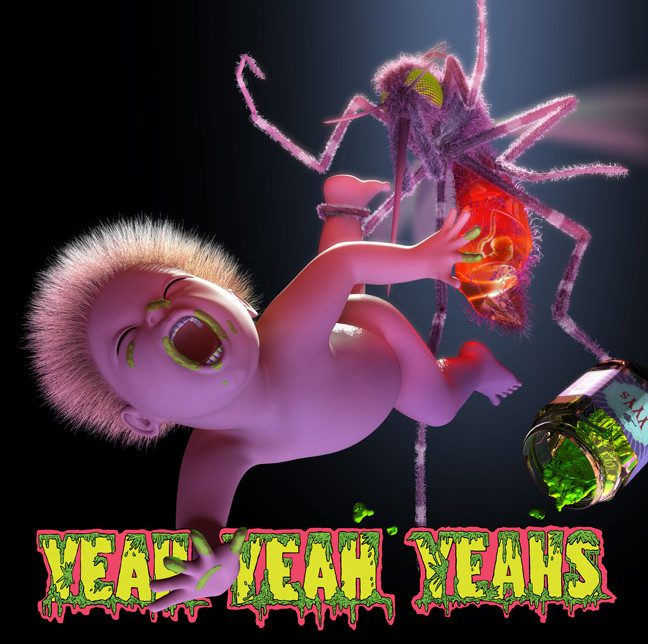 After being out of the game for four years, NYC gang Yeah Yeah Yeahs have returned with their fourth LP, Mosquito. The New Yorkers have teamed up with a myriad of collaborators on their latest output, ranging from Dr Octagon, James Murphy, Dave Sitek and Nick Launay and with these varied contributors comes a veritable buffet of audio morsels. Mosquito has been labelled as YYYs “soul’ record however there are also touches on roots reggae and flashes of abstract electronica. Not the kind that populated It’s Blitz the band’s third LP, these forays into synthscapes favour the experimental over anything pop. Like with any buffet there is something for everyone but with that not the whole shebang is entirely palatable either.

The overwhelming feeling with Mosquito is like getting your grubby mitts on the band’s sketch book, as a number of songs feel like doodles or stick men drawings that are not quite finished but have elements of promise. The LP’s title track is a soulful take on YYYs garage rock bombast but slightly subdued as if there is a required layer of oomph missing. Even when Karen O hollers “I’ll suck your blood!” there is the notion of if this appeared on the group’s debut, Fever To Tell, you’d believed she’d drain you dry whereas here it’s a little like an empty threat. ‘Under The Earth’ is where the trio venture into their reggae guise and with it a track which feels a little directionless even if it does cast an atmospheric shadow. Mosquito contains a few too many songs that tend to saunter when you’d expect them to swagger.

When the band’s scribbles do come to life, you feel this is where the brave step into unchartered waters pays off. ‘These Paths’ is when YYYs dabble with the off-kilter electronics previously mentioned, so much so, O’s vocal sounds like it’s been laid across Radiohead at their most Kid A. The experimentation in digital layers suits O’s turbulent vocal style which fights for attention over the morphing soundscapes. ‘Area 52’ will have old YYYs breathing a sigh of relief because this is when Nick Zinner gets to abuse his guitar like it’s been very bad indeed. An ode to aliens powered by intergalactic vibes, it’s like ET grew up, became inspired by Iggy Pop and decided to cover ‘I Wanna Be Your Dog’. ‘Subway’ works as an ode to the three piece’s hometown and actually features O’s fragile vocal over a sampled subway train. This distant, exploratory song transports you to The Big Apple, but in a lonesome kind of way, like the sprawling metropolis is charging around you as you stand stationary on a train platform. Hooking up with Dr Octagon should have failed but the inclusion of the rapper on ‘Buried Alive’ adds a new dynamic to YYYs pleasing strut.

Through all the experimentation and flirtations with various genres, O and Co still know how to produce a song or two that invokes a lump in the throat, ‘Wedding Song’ is a distant to relationship to cult classic ‘Maps’ and sees the band channelling Mezzanine-era Massive Attack with the idea of crafting something poignant and beautiful. ‘You’re the breath that I breathe’ is the simple vocal hook and one that renders your heart warm and content. ‘Always’ is another reflective nugget which feels like someone draping muslin cloth across your face due to the song’s dreamy, ethereal nature.

More of a pick and mix selection than a fully formed record, Mosquito at times punctures the skin but not often enough does it have sufficient zeal to take a good slurp of your life source.