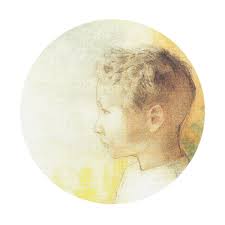 Daniel Benjamin and Maddy Wilde, the Toronto-located duo who are behind Moon King are long-time friends and musical collaborators who are deeply connected to the Canadian music scene, playing in or with bands/artists like Majical Cloudz, Grimes, Austra, and the now-defunct Spiral Beach. Daniel has toured with his brother Airick’s project Doldrums and Daniel and Maddy recently finished up a tour with Alvvays. They are now offering up their own project, Moon King, and will be releasing debut album, Secret Life, on April 14th via Last Gang Records. While Secret Life is their first proper studio album, they have dropped two previous compilation albums, Obsession I and Obsession II, which cover the rest of their output.

On Secret Life, Daniel and Maddy take their electronic and punk influences and shape them into pop song frameworks. The pace is up-tempo, but the lyrics, or at least what can be heard of them, are downbeat. They make an effort to balance melodicism and dreaminess with noise and aggression, but the result leans heavily towards the noisier aspects of their sound. Most of the songs grind away with short, repetitive cycles of harshly distorted guitars, incessantly steady drum rhythms, and the occasional odd and too prominent electronic percussion. Daniel and Maddy get the balance right late in the album of nine songs. Track #6, “Threads” is a keeper that shines with Maddy’s sweet, babydoll-breathy vocals that are mirrored by brightly twinkling reverb guitar notes. Her floating, drawn out vocals are pitted against a fast-shaken, rhythmic beat and ominous lyrics about houses that are burning and children being inside…

Lead single “Apocalypse” is a fitting example of the Moon King sonic template and an explanation of how it first entices and then exhausts the ears. The song starts off at a quick pace with a simple guitar motif, tambourine jingle percussion, and a tapped beat. Daniel sing-talks in a tone reminiscent of Billy Corgan, slightly high in pitch, stretching upwards, a bit nasal, but lighter and less whiny than Billy’s vocals. It’s difficult to catch the gist of the lyrics, but “I fall to pieces” can be discerned. A second guitar line with an edge of distortion comes in, brightening Daniel’s slowly exclaimed vocals. The light thump of a drum is introduced right before the song busts wide open with vividly buzzed-up distorted guitar burn and an emphatically rapid pace. Daniel exclaims even more markedly against the propulsive tempo and odd, upbeat, globular pocking notes. The fast pace is constant and tiring, the short instrumental refrain is too repetitive, and the whole song hinges only on its exhilarating, driving rhythm. Daniel’s lyrics can’t be heard clearly, so there’s no added meaning given to the song and the sounds found within seem to be a recycling of what was displayed on the album-opening track “Roswell”…

The title track “Secret Life” is a highlight of the album and sonic gleams of Cocteau Twins and latter-day My Bloody Valentine perk it up as a dreamy Maddy drifts through her words in a hushed tone, “…wishing I’m still invisible” and admitting “I was so bad for you.” She reminisces over her secret life (“Remember the time / your hand in mine…”), but again, the lyrics are hard to make out and that diminishes the impact of the song. The beat is hyper-agitated and echoed, like a sped-up trip-hop rhythm, and quickly-picked, sharply radiant guitar notes (or is it some type of harp?) and cymbal ticks and shimmer lift up the atmospherics.

At the beginning of “Impossible”, Maddy sings airily amid a flat-clacked beat and minor chord guitar strum, then pushes out her words on the chorus as she proclaims “There’s no one there / I wait for you / The choice is yours / I won’t choose loneliness…” Daniel inconspicuously shadows Maddy’s vocal lines and subtle, delicate piano notes are added to the mix. The same stormy, distorted guitar sound found on “Apocalypse” is exhibited here and it drops in like a swarm of angry bees mid-way through the number. And again, the relentless pace doesn’t let up and leave any room to breathe aurally. Following “Apocalypse”’s pattern, “Come Back” starts off at a moderate clip of fast-strummed guitar, wavering, sustained synth notes, and hushed, breathy vocals from Maddy (backed tightly by Daniel’s voice), and then breaks out with a speedy, and annoying, tocking sound, super-quick ticking beat, and deep grind of distorted guitar. Maddy’s vocals push out on the chorus once more as she declares we “…can’t stay apart from each other” and “Don’t wait / I might choose / might choose too much of you.” Dreaminess is drowned under repetitive guitar refrains on the loud and noisy “Hexe”, while “Medicine” brings in some of the warped weave of My Bloody Valentine as Daniel sing-talks in a softer, but indecipherable vocal tone that “It’s a strange thing / how I’m mystified…” (By what?!!). Again, the song’s pace is constant and the guitar motif is repetitive – continual threads that run through the entire album.