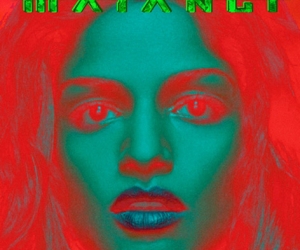 Matangi is the new record from Maya Ariulpragasam, aka M.I.A. In comparison to 2007’s crossover hit Kala, her last record was a veritable flop, if only because there were no singles that found the same success as “Paper Planes”. It’s likely that Matangi will suffer the same fate, but it’s just as well – the songs here may be more grating than anything on Kala or MAYA, but they feel fresh. The lyrics are sometimes oblique, but there is a clear focus on contemporary surveillance culture. In a recent interview, M.I.A. even recounted a story about Julian Assange assisting with lyrics (though he remains uncredited here).

The album’s second track, “Matangi” sets the tone for MIA’s political/skeptical lyrics – “If you’re gonna be me you need a manifesto, if you don’t have one you better get one presto”. The production resembles Syrian dance/wedding music that has seen a growth in interest in the western world (in particular, Omar Souleyman). Matangi also dabbles in other genres. “Only 1 U” is classically boastful hip-hop – “Just cause the game is up doesn’t mean I didn’t win” – complete with a sample of a boxing ring bell. On “Warriors”, the song is carried by sitar/bollywood samples, but juxtapozed by a glitchy two-step backbeat, which has enough weird elements floating around it to avoid sounding dated.

The Assange co-write comes on “atTENTion”, but M.I.A.’s paranoia comes to a head on “Come Walk With Me”. She warns: “There’s a thousand ways to meet you now/There’s a thousand ways to track you down/ Whatever you said and done”. Although the song isn’t explicitly about surveillance, little nods like these serve to remind the listener of the lack of power they have against those in control. Like the title track, the second half of “Come Walk” suddenly transforms into a prototypical Dabke beat, at twice the speed of the rest of the song.

Feeling at times both primitive and futuristic, Matangi is an entirely new frontier for M.I.A., and it works. With excellent production and thought-provoking lyrics, this album is an exciting step forward in Ariulpragasam’s career.