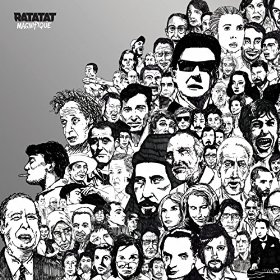 It’s been five long years since the last offering from the Brooklyn-based electronic/instrumental duo of Mike Stroud and Evan Mast and on July 17th Ratatat returns with its 5th album, Magnifique, on XL Recordings. With a title like ‘magnifique’ and the great expectations of, and monumental anticipation from, fans of the band and the music press, blogosphere buzz is quickly building for the upcoming unveiling of Mike and Evan’s potential masterpiece. Two singles have been released so far; the pumpin’, thumpin’ funk of “Cream On Chrome” in April and brightly up-tempo synth-rocker “Abrasive” this past June. Ratatat will be on tour from mid-July to mid-September and will also play one music festival each month from September to November in support of the new album.

With its 14 musical genre-melding instrumentals connected to each other by a webbing of radio dial turnings that tune into little snippets of radio station airplay, Magnifique is meant to be Ratatat’s conceptual opus. Mike and Evan orchestrate the whole album, however, with such control and precision, where every note is assiduously placed to form a sonic pièce montée, that there’s barely any room for playful chaos or cathartic audacity. This may not be noticeable when listening to only one song at a time, but when the album is spun from start to finish, the restricted result of the disciplined compositions becomes abundantly clear.

The album is bookended by a brief “Intro” and “Outro” where the radio dial lands on a classical piano piece with electric guitar touches for the “Intro” and sprightly piano notes, tambourine hits, drum thump, and guitar line comprise the “Outro”. Mike and Evan seem to be a bit confused about the main theme of Magnifique, adding the sound of an old movie reel running out in its projector at the very end of the album. Do they want Magnifique to be a cinematic soundtrack pastiche or stylistically hybridized radio station fodder?

Engaging lead single “Cream On Chrome” weaves a sinuous, hypnotizing guitar line into the steady, but lively bass-directed funk pace while electrif(r)ied rock guitar riffs and crunchy percussion top it off. The main electric guitar line emits a high, sharp, whining pitch, sounding almost like a human voice. This exact guitar pitch is used on almost every track on the album, and at first it’s interesting, but during the course of the whole platter it becomes irritating. The idea of using the tones of the guitar to simulate the human voice, however, is an inspired and welcome decision on this instrumental album.

While “Magnifique” may not qualify as being magnificent, it does possess a subtle charm and is one of the most musically ‘melting pot’ songs of the album. Pulled symphonic strings and limpid acoustic guitar lines glide along with the slow beat while a 1950s piano refrain pops up mid-stream. The contemplative atmosphere is bolstered by small curls of lap steel guitar and a more subdued electric guitar line that, again, mimics the human voice. Somehow this mix of classical strings, alt-folk acoustic guitar, 50s piano notes, and country and rock guitars exists in pleasant, retro harmony.

Second single “Abrasive” is actually quite smooth, romping by with a propulsive beat, running bass line, amorphous squelchy sounds, bright, zippy notes, and the sweet sway of that vocalizing electric guitar line. Mike and Evan layer changeable guitar riffs on top of a base of drums, bass, and electronic notes in a successful effort to make sure the song doesn’t become too repetitive. While not as breathtakingly dazzling as Daft Punk’s “Aerodynamic”, “Abrasive” seems to take some of its musical cues from that number.

The crinkly tinkle of breaking glass and a shuffling and ticking beat keep the chill “Countach” on its toes. The repetitive, short-phrase refrain of those aforementioned sounds are blended with synth-piano notes and starry skies noises that cycle through most of the song until some of the sonics are removed for a short while. At the end of “Countach”, the radio dial flips through a few selected, ephemeral audio clips. Around the mid-way mark of Magnifique, just when a break-out, shout-out-loud song is most needed, “Drift” does the opposite, reeling it in with a low-key, measured pace. Finger-punched organ notes and plucked bass form the beat, while high-in-the-sky curlicue guitar lines, rattlesnake-like maracas shake, and that same voice-like electric guitar make their entrance. It concludes with more radio knob-twiddling, this time leading to odd, possibly vocal, “Wha-ooh” noises and some guitar noodling.

A highlight of the album, “Pricks Of Brightness”, comes across like a traditional rock song with its Interpol-like bass line, ticking and tapping beat, and buzzy guitar notes that (unfortunately) resemble a kazoo. On the chorus an honest to goodness drumkit beat emerges, along with cymbals shimmer and grand(iose), Muse-like guitar riffs still pitched in a higher tone. The clincher for the win is the addition of a Paso Doble foot-stomping beat and it’s a shame when the song abruptly ends. Mike and Evan head for the dancefloor on the over-6-minute-long “Nightclub Amnesia”. The dance-rock track sports a harder, heavy electronic sound and pronounced, thumping beat. A mass of sonic pieces are collated together over the run of the song, from crackling electric guitar blips to the handclap tempo to fuzzed-up synth notes, glitchy bits, and whistling droid sounds. Even wavering lap steel guitar notes make an appearance! The sudden ring of a bell cuts the party short, again recalling the finale of “Aerodynamic” by Daft Punk…

It’s when “Cold Fingers” hits that the realization also strikes that, for all the composition, fusion, and relative complexity of the disparate instruments and sounds, Ratatat has yet to truly let loose on Magnifique. The synths-(over)used-as-guitars bit is also getting tired due to it always staying in the same high-pitched range. On the other hand, there are some different aural morsels on “Cold Fingers”, like the rubble-moving beat, shaken tambourine, brief blur of lower register synths, and the nice plink of light piano notes that, unfortunately, only occurs twice near the start of the song. “Supreme” doesn’t live up to its name, unless it refers to be supremely mellow, as it moves at a slow pace and features unfurling lap steel guitar curls and two other guitar lines. Found sounds are pinned in like the flutter of bird wings and avian twitter, while the ending consists of unnecessary radio snips.

Strummed acoustic guitar opens “Rome”, but soon enough that higher pitched electric guitar comes in, as well as a 3rd guitar line. The blending of the two to three guitars is pleasing, but the short-phrase noodling of the high tone guitar basically plays the same refrain that marks most of the other songs on Magnifique. A jaunty drum beat and bass line add some kick to the tune and “Rome” eventually swells with a full rock vibe complete with a smacked drum beat, tambourine shake, and traded off and mixing guitar lines.

Tape rewind starts off the laid-back “Primetime” which revels in a funk groove and that same high pitched guitar line. There may actually be some spoken word on this track, but it’s hard to discern because the audio blip goes by so fast. At its conclusion, a tape player button is pressed, a reverberating sound is heard, and then the tape player is stopped. Mike and Evan craft a straightforward cover of Springwater’s 1971 song “I Will Return”, dressing it in piano/guitar notes, lowly swooping and drooping lap steel guitar lines to give it a country feel, a steady drum beat, and sporadic cymbal wash. Wordless vocal “Ahhhs” materialize and then fade away at the song’s dénouement.