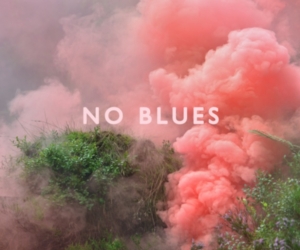 Five albums into their lifespan, Los Campesinos! have encountered many a hurdle but thankfully through break ups and revolving door line-up changes, the welsh six piece are still very much a full operational band and with a new album to maintain their legacy. The band’s fifth outing goes by the name of No Blues and after the doomed relationship vibes of previous record, Hello Sadness, the Cardiff residents have carved out an optimistic, upbeat record but one that is embellished with shards of melancholy. Isn’t that how all good pop music should manifest?

Speaking of pop music, the first slice of No Blues came in the guise of ‘What Death Leaves Behind Me’, which although carries a bleak title is where the six headed indie kids serve up themselves at their most palatable. Guitarist Tom Bromley simply sums up the choice of lead single by stating “I thought it was a really good pop song and I thought it would be a surprise after Hello Sadness” when speaking with Fake DIY. Awash of warm, fuzzy guitars and children’s toy-like keyboard sounds, the band sound at their most playful with an aural charm buoyed by a confident sounding Gareth Paisey, who in turn is supported by a wall of thrilling vocal harmonies. ‘Avocado, Baby’ the band’s next single is just as indie-pop which is attributed to a driving melee of rocketing drums and skipping guitar lines. Davies rips into the track’s chorus, by yelping the title to the tune of a cowbell breakdown that ushers in the use of the Cardiff Cougars Allstar Cheerleading Squad – yep that’s right, Los Campesinos! the band anchored to the labelling of “twee” have incorporated cheerleaders into their gang, how hasn’t this happened before?!

Indie-pop and football (sorry I refuse to say soccer!) go together like water and electricity normally but Los Campesinos! are avid fans of the beautiful game and with that, a number of ditties are indebted to sneaky references to their beloved sport. Opening track ‘For Flotsam’ is a musically jubilant trawl through the band’s quirky pop leanings and amongst the cute vocal harmonies you can hear Davies delivering lines such as “the last set of goals taken down” and “I throw my goalkeeper forward”. Whilst ‘No Glue’ is a swaying, gently plucked tender animal that has Davies dropping his quickfire yelps for a more considered vocal delivery. Despite the tracks subtle nature, the frontman can’t help but squeeze in another footie metaphor “diving into headers/putting his pretty face where the boots are flying in” is a nice take on putting your balls on the line for the greater good.

Melancholy peaks its head into the band’s wares on the odd occasion, the great juxtaposition of ‘As Lucerne/The Low’s jubilant swell of violin, rushing guitars and thudding drums are pure saccharine sweet, topped off by the cherry of Davies lung bursting vocals. But this joy is underpinned by the frontman declaring “the low is what I came here for”. ‘For Flotsam’, poppy as it sounds on the surface, has an element of despair with our talisman murmuring “She says if you’re unhappy you’ve got to find the cure/I prescribe me one more beer/beyond that I’m not sure”.

Confident and mature are two words that can be pinned to the six piece’s mast and although the former can be detrimental as mature generally means boring, this isn’t the case with No Blues, as the album’s assured poise casts a broad silhouette across the outfit’s sonic endeavours.