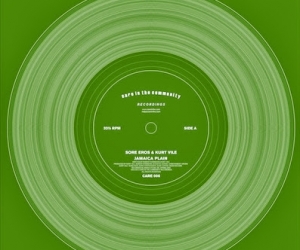 Care In The Community Recordings

Following 2012’s critically acclaimed Wakin’ On a Pretty Daze, Kurt Vile returns here with Jamaica Plain. The EP is an archival release, culled from tracks Vile recorded to tape in 2002-2003 with Sore Eros (Robert Robinson), a former member of Vile’ group The Violators. The EP is titled after a historic neighborhood in Boston, where Vile lived before moving to Philadelphia.

The opening title track shares a basic semblance of Vile’s later material – contemplative finger picking, and structure rooted in popular American folk/rock music. After two minutes of tape dropouts and various instruments fading in and out, the song anticlimactically reaches its peak, which is four minutes of wordless jamming. It’s pleasant, but at almost 7 minutes it lacks the structure found in Vile’s experiments with longer freeform songwriting found on his more recent recordings.

Serum, the second track, focuses less on Vile’s signature guitar acrobatics and more on the mood surrounding the recording. Here, his drawl is transformed into a quiet whisper, with keyboard and drum loops circling in the background in a meditative fashion. It’s the only song on the EP that will be immediately recognizable as Vile to fans of Wakin’, and certainly the strongest track of the EP.

Calling Out of Work, the third and final track on the EP, features Vile at his most experimental. If Robinson’s input is felt anywhere, it’s on this track. The song abruptly transforms from a simple repeated guitar line to a wash of ambient noises from an undetermined source.

One gets the sense after hearing the EP that these recordings may have been intended as rough sketches, not intended on being released publicly. A banner year for Vile, as with many artists, can result in a mining of the back catalogue for ‘new’ material, and Jamaica Plain is no exception. Whether or not Vile fans need this material, it serves its purpose as a snapshot of Vile’s songwriting before he became internationally recognized.