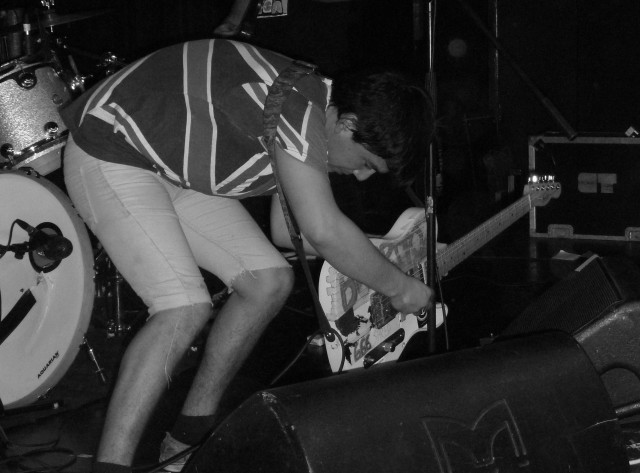 Fuck It Dog Life’s A Risk brought their ragged songs about low rent booze, scuzzy drugs and slacker anthems to a feral crowd of sweaty punk fans. Before the band even took to the stage the writing was on the wall that this Birmingham crowd were up for a good night, fans jostled to have their pictures taken with guitarist Elvis Kuehn (how cool is that? Elvis!) and when his brother Max was setting up his drum kit, members of the audience were hollering the stickman’s name and chanting the song title which bears his moniker ‘Max Can’t Surf’. We’d like to point out the band haven’t even played a single note yet! Very much the DIY group, FIDLAR assemble their pedals on a disused skateboard deck and the shows set lists are daubed across bits of cut out cardboard. No separating the M&M’s for these lads.

FIDLAR then take the stage and beckon the baying crowd forward, on this demand the audience of punks surge forward just as the LA skaters slam into ‘Cheap Beer’, the consolidated mesh of bodies swell and sway as one to an ode about cut price grog. Sounding as visceral as you’d expect the four piece are the living embodiment of slackers who actually give a shit, they may have songs named after nose candy (‘Cocaine’) and loose women (‘Whore’) that sees the crowd singing the opening verse before the band get chance and of course, cheap ass beer, but the way the band deliver these ramshackle nuggets is with a full tilted burst of attitude. The scene has been set and rarely does it drop from borderline chaos, the amassed throng sweat and ricochet off one another, even indulging in some crowd surfing despite the sign “Crowd surfing and throwing objects will have you thrown out”, this doesn’t deter one plucky fan from careering over the barrier onto the stage and then back again only to be engulfed by the swirling mosh pit.

Notably the crowd in front of FIDLAR are fresh-faced young whippersnappers and when Zac Carper announces ‘No Waves’ a document about rehab and how it sucks, the kids roar with approval, like they, well totally agree. Quite why these nippers have been to rehab escapes this writer, possible iPhone addiction? Substance abuse of Lucky Charms and shop bought candy? Hang in there champs! Patronising tones aside the group of dudes in the front rows burst with endless energy that spurs the band on and in turn the clammy loons in the pit can’t get enough of it.

The biggest cheers of the night are saved for ‘Max Can’t Surf’ dedicated to the ‘ginger angel on drums’, the savage ‘Cocaine’ almost induces near pandemonium from one punter who can’t stop screaming the song’s title and then set closer ‘Wake.Bake.Skate.’ rounds of the night brilliantly with Carper abandoning the stage to scream out the songs dissolving finale whilst leaping into the arms of the fans in the front row.

Feedback rings out, the crowd chant ‘FIDLAR’ over and over again, the house lights stay dimmed but the band don’t emerge for an encore, but with such a blistering set and after ‘Wake.Bake.Skate’s chaotic parting shot quite how the LA punks would top this is anyone’s guess. Fuck It Dog Life’s A Risk, Fuck It Dog, this band kick some serious ass!