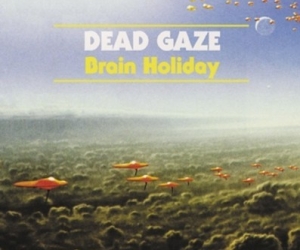 After releasing their much lauded self-titled compilation in March, Dead Gaze have arrived with Brain Gaze, their full length debut on Fat Cat. The focus here is on songwriter Cole Furlow’s penchant for the melodies and sounds of decades past, and marks his move from bedroom to proper recording studio.

Opening track “Yuppies Are Flowers” sets the tone for the majority of the album, coming on strong with a chunky guitar riff that sounds immediately familiar, if not reminiscent of “Just What I Needed”. The spirit of the song is in line with The Cars (albeit 25 years later) – anthemic, but not overly pompous. In keeping with more contemporary influences, the chorus diverts back to a minor-key grunge riff, reminding us that Furlow has likely been influenced by a variety of acts, both then and now.

From here on out, Brain Holiday prefers to stick to variations the same formula. The hook from “Rowdy Jungle” sounds lifted from a Pixies or Weezer song, and “You’ll Carry on Real Nice” is a mid-album rave up that would fit in as well on any number of alterna-rock records from the mid 90’s. Where the album gets really interesting, though, is the songs that mix both decades and genres in a way that feels timeless.

“Breathing Creatures” begins with a lounge-inspired Rhodes riff, before morphing into a beautifully orchestrated pop song complete with classical guitars and trumpets. While this is the most jarring example, there are many more instances where Dead Gaze deviate from the guitar-heavy blueprints they’ve laid out for themselves, and the results are surprisingly good. Few bands would make these stylistic jumps on their debut record, and Dead Gaze deserve applause for taking these chances. While some of the aforementioned guitar moments can feel formulaic, there are many leaps of faith that make Brain Gaze worth investigating.