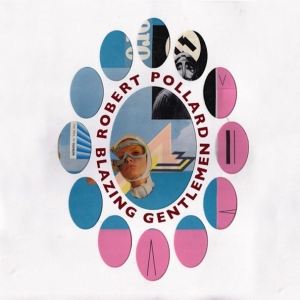 Keeping up with his prolific reputation, Blazing Gentlemen is the 16th Bob Pollard associated release of 2013, including both full-lengths and multiple singles. In a press release for the album, Pollard noted that he has “finally figured out how to write a song after 55 years”. This is a lofty claim for someone with this many releases under their belt in one year alone, but in many ways Pollard’s recent solo albums have proven to show a new burst of chops and energy, breathing life into a career that always ran the risk of becoming stagnant with an endless stream of releases.

The strongest back-to-back hits on the album come with “Extra Fools Day” and “1000 Royalty Street”. “Fools” is classic Pollard, one minute and thirty seconds of seamless chord/tempo changes (a la A Day In The Life), nonsensical lyrics about secrets in the mud, and no discernable chorus. If it weren’t for Pollard’s sugary yelps, “Royalty” would be a near-grating post punk song. With these chugging SST/Ginn-esque guitars making multiple appearances throughout Gentlemen, Uncle Bob proves to listeners that he’s not getting any softer in his old age. He’s also not losing any of his prowess – true to his word, these are some of the strongest songs that Pollard has released since his most acclaimed albums of this and previous decades.

Towards the middle/end of the record, Pollard embraces his inner psych-rocker. “Tonight’s The Rodeo” is a paisley underground romp with clean, chorused guitars and constant vocal harmonies. Lyrics here make reference to being ‘pregnant with love’, which is the type of nonsexual babble you might find on something from the same era but sounds much more sincere. “Tea People” is a brief tip of the cap to Nuggets and a beacon for pop-psych fans: straight-time guitar and wordless ‘bah-bah-bah’ backing vocals.

Blazing Gentlemen is a 30-minute journey through a number of genres and GBV-isms, and will no doubt bring back anyone who has written Pollard off in recent years. If you buy one of his records this year, make it this one (or, alternately, his two Circus Devils full lengths, which dropped a few weeks earlier).