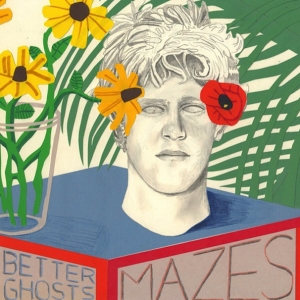 Acting like a conduit between their sophomore record, Ores and Minerals released in February of this year, the band’s acclaimed live show and what the future may hold, Mazes’ return swiftly with a mini LP, that goes by the name of Better Ghosts, so coined because according to bass player Conan Roberts, Ghostbusters 2 had “better ghosts”. Well, of course.

A mini album you say, isn’t that an EP with too many songs? Well, Better Ghosts consists of ten tracks with three elements on this bridging document taking on the guise of an intro to start things off. ‘Ephemera’s clipped sounds merged with robotic insect noises drops in at the middle of the LP as an interlude while ‘Purrr Out’ jitters and actually purrs with fuzzy feedback acting as the album’s outro. In the terms of developing something that delivers a snatch of conceptual air to Mazes, the use of instrumentals does this nicely. Ultimately with Better Ghosts, the Manchester based band have crafted a collection of songs that hints at interesting ideas; the equivalent of immortalised note book scribbles and elaborate doodles. While taking a peak into the band’s collective brain is interesting, overall Better Ghosts lacks the tangible notion of a body of work that has any real substance.

It’s with slight glimmers and repeated nuances that Better Ghosts illustrates a promising leaning, ‘Hayfever Wristband’ fidgets with awkward math-like riffs and downplayed vocals. Imagine a lethargic Foals that are happy to incite head bopping as opposed to chaos. ‘Notes Between F and E’ injects the use of drum machines and another elastic riff that rebounds like a rubber ball being flung at a wall. Bizarrely here’s where the trio sound like they’re covering The Bees, ‘Chicken Payback’ sans the zest. As to whether Mazes where wary of fully committing themselves to this little stopgap recording is a mystery but there’s several instances where the infectious nature of a tune is aching to burst free but the reigns always seem to be held tight. ‘Organ Harvest’ is a primary example of where the record could step it up a notch, what with a hefty circular piece of guitar play that denotes a psychedelic tendency albeit at the dark toned spectrum of the colour palette. With it the driven nature is diluted by a pedestrian pace and Jack Cooper’s tuneless vocals. ‘Sandgown’ falls into the same trap with a song happy to plod when it should skip with unrelenting pep.

Better Ghosts is an album hampered by its own meanderings, there are moments of intrigue and accumulated ideas that, if fully nurtured could have become special but on the whole, there’s differently far superior spirits out there.