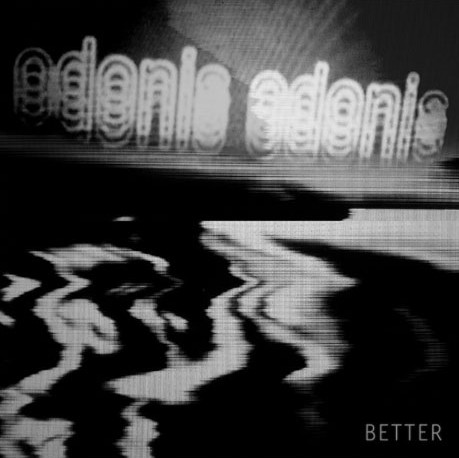 Odonis Odonis, not to be confused with the 13th Century French theologian Gerardus Odonis, are an Industrial/Punk/Gaze band from Toronto. The genre description is from their website, and as usual can be a bit misleading. Sometimes it can be a case of a band categorizing themselves in how they see it, and not how they really are. In this case the band definitely has the low-fi buzz sound that shoegaze is built on, so I’d probably reverse the order to Gaze/Punk/Industrial. The “Punk” modifies the “Gaze” because it’s more up tempo and aggressive than most “Gaze” bands, and then the wildcard is the “Industrial” which I’m not sure I totally understand. By itself, “Industrial”, is something different, but as a third modifier after “Gaze”, and “Punk”, it perhaps gives you a sense of the sound of this up-and-coming band that have released a blistering new EP Better that’ll make you “gazethrash”.

At 6 songs averaging 2.5 minutes, Better will be over before you know it, but don’t be surprised if you put it on repeat. “She’s A Death” starts innocently enough with a standard gaze riff, but then suddenly kicks into high gear. With most gaze sounds, simple riffs are integral and OO utilizes it with a kicking beat which is surprising considering the drums are down in the mix. “Better”, the title track, will be one that should not only get a lot of play, but may even make it onto some dance floors at more experimental guitar-rock club nights. Drums and bass take centre stage here with a grooving beat that’ll make you “swingthrash”. I’m already fascinated, but when the third track “Intelligence” hits, I’m impressed at the variance of their sound which I didn’t expect from such a short EP. The bass is distorted, and it makes for the loudest track on the EP, which is hammered home by the staccato drum beats, which is perhaps what they are referring to with “Industrial”. “Robot Surfer” comes blazing next as the punkiest song here, it’s fast and furious and utilizes all the elements they’ve introduced so far with hurricane ferocity. “Flight Risk” is a variation of some of the previous tracks, and it’s where you can take notice more of Dean Tzenos’ vocals. They’re that perfect blend of fuzz, and the pitch is enough that it becomes its own instrument but not so much that you can’t understand the lyrics. At over 4 minutes “Black Bones” is Odonis Odonis’ opus. It’s classic gaze, a repetitive fuzz riff and echoing vocals, it’s what roots this band, and in a scene where the sound is prevalent, they show here that they will be a force to be recognized.

The music genre game is an interesting language evolution. When each new sub-genre takes elements from another genre, it changes said genre, and goes on and on. If you don’t pay attention for a while, you may miss out on a whole step. Sometimes it doesn’t matter, like in the case of Odonis Odonis, who have created an album from inspiration (Jesus & Mary Chain, Pixies, etc.) that doesn’t sound anything like they sound, and have created a sound that sort of sounds like other sounds, but because of their unique intention, becomes original. I may be missing out on a step here, but I don’t care, I’ll make up descriptions like “gazethrash”, and “swingthrash” all day long if Odonis Odonis keep pumping out gems like Better.