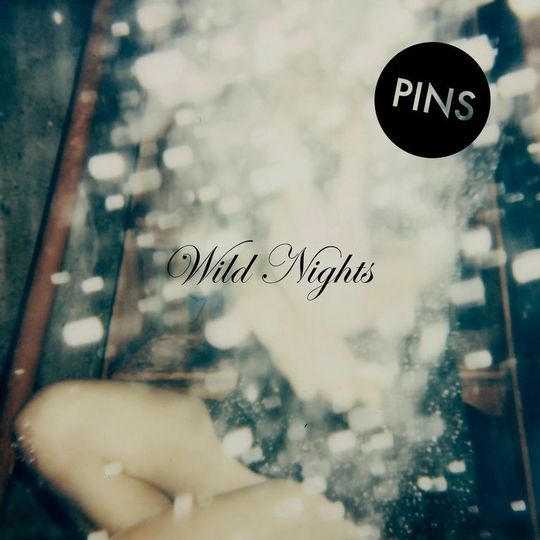 Mancunian four-piece PINS took shape in the relatively recent year of 2011 when Faith Holgate (vocals, guitar) decided to create an all-girl band to combat the likelihood of becoming just a female prop in an otherwise male-dominated band. She is joined by Lois McDonald (guitar), Anna Donigan (bass), and newest member Sophie Galpin who has replaced Lara Williams on drums. Debut album Girls Like Us was released in September 2013 to critical raves for the band’s post-punk, noise-pop sound, ‘no regrets’, carpe diem (and noctem) attitude, and magazine cover-ready indie style. The adulation has only grown from there and this year alone PINS has traveled the music fest circuit and opened for the bands Sleater-Kinney, Drenge, and Wire. The band members are set to tour the U.S. throughout the month of June in support of their 2nd album, Wild Nights, which hits the streets June 9th.

Three tracks have already dropped for public consumption before Wild Nights comes out – and they’re not totally representative of the range and depth of the tunes to be found on the album. Lead single “Too Little Too Late” is a sonically slow introduction to the album with its trudging bass, synths, and drums grind. It musters up some gumption on the chorus as Faith sing-talks pressingly, while still drawing out her words, that “I know you said sorry a thousand times / but my heart, it still aches.” The lyrics-centric tune is meant to be an empowering, F U dismissal to anyone who has dissed their other half in a relationship, but catharsis is only reached briefly, at least instrumentally, in the last 30 seconds of the song when it unexpectedly speeds up to an exhilarating whirlwind pace.

Second single “Young Girls” fares somewhat better, lyrically tapping into the bored-suburban-youth-with-nothing-to-do zeitgeist on lines like “Sick for days / Watching the rain / Everybody looks the same.” Faith sing-talks with mild malaise amid the mid-tempo beat, bass line run, and occasional trilling reverb guitar riffs that lift up the lethargic mood. While Faith expresses that “We want to get away from here / Anywhere, just to disappear.”, her languishing tone and the steady drums tempo reflect the reality that escape from the suburbs (or any town/city) oftentimes only exists in teenage dreams.

“Molly” rounds out the album’s current singles and displays a different facet of PINS’ sound. Not exactly rock, not really pop, this tune radiates a C&W noir vibe from its purposeful drums pace to its guitar motif tinged with a bit of stealth and menace. The spur-jingle tambourine, harmonizing vocals sweetness, Faith’s slightly wounded tone, and stark lyrics like “You are the perfect storm / You’re where I belong” and “You look so good when you’re bad.” fit comfortably into the alt-country noir slot.

Album opener “Baby Bhangs” does justice to the ‘wild nights’ theme, kicking off with a fuzzed up guitar line and emphatic drum stomp. Faith coolly sing-talks all the right keywords like “black leather” and “glitter” and enunciates in a crisp, clipped tone “Laquered lips / snake – hips / electric sky / dance ‘til you die.” Distorted guitar frisson hangs out in the background while furiously shaken cymbals and tambourine compete with the kinetic drumwork. A needling guitar line stitches through sporadic electronic noises, fleeting reeling guitar riffs, and a lighter chorus of wordless vocals.

The mellow “Curse These Dreams” flows with dreamy, floating vocal harmonies, rolling electric guitar lines, and dynamic drum rhythms. Faith asks with casual directness “When you’re alone at night / do you feel satisfied?” – the obvious answer being a resounding no, at least from her viewpoint. She’s “chasing the night” while images of someone unattainable or from a past relationship appear in the sky before her eyes… Culminating and dissipating guitar and drum fulmination provide a backdrop for Faith’s rawer, Courtney Love-like exclamations on “Oh Lord”, where she reveals more emotion than on the previously mentioned tracks.

“Dazed By You” is an up-beat, twangy affair that fires on all cylinders. It combines briskly strummed and picked guitars, a swinging drums pace, cymbal shimmer, and alluring vocals from Faith as she sings “Taking time that isn’t mine / I want it all tonight.” Near the end of the song, the tempo picks up tremendously for a surprise sonic throwdown complete with bashed drums and cymbals, scrambling guitar and bass lines, and howls of delight. Wild nights indeed!

PINS channels the Girl Group 60s on the retro “Got It Bad”, which shines a light on the brightest aspects of the band – Faith’s changeable vocal delivery, lofty cooing harmonies, reverb guitar chime, cymbal shimmer, and pronounced drum hits. Faith is simultaneously sultry and detached on the darkly gleaming “House Of Love”, louchely and perversely stating “To know what is right / you’ve got to do wrong.” amid waves of cymbal scintillation, a muted clacking beat, and running bass line.

“If Only” brings back the up-tempo swing with wiry guitar and bass lines and a sharply hit drum beat as all the while Faith wistfully sings the bleak lyrics “I waste all my days / in this haze / I can’t escape.” The song leaves an unfinished feeling behind as it fades out too quickly. The album closes with the vocals-focused, contemplative “Everyone Says”. Faith is in the spotlight, accompanied by subdued strummed guitar and a measured pace as she ruefully sings that “Everyone says that we’re no good”. It all ends on a note of doubt with Faith questioning “What do they know / that I don’t know?” Well, what ‘they’ *don’t* know is that this second album by PINS is actually very good!