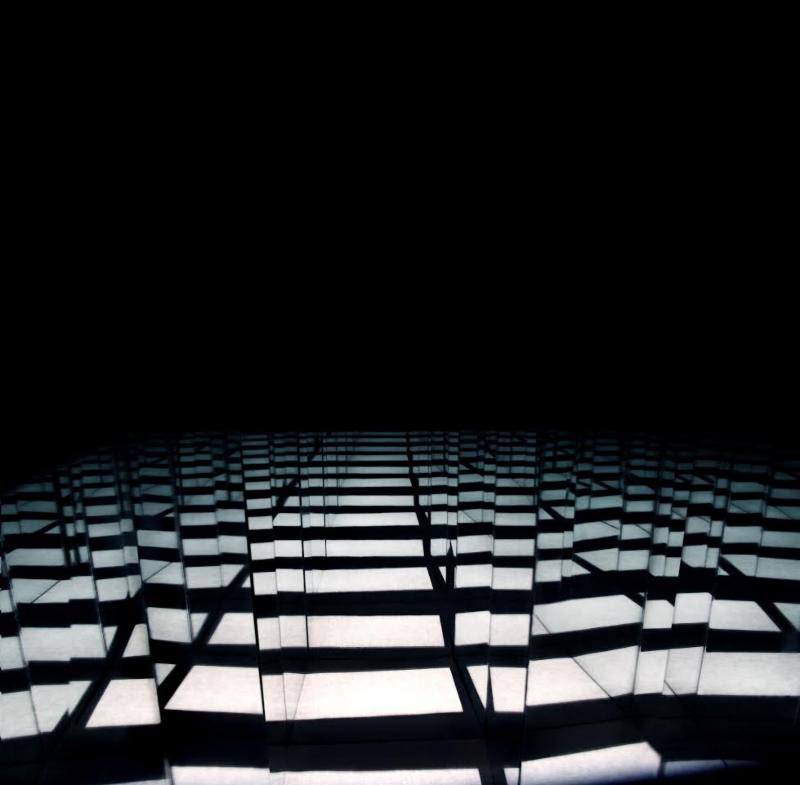 The Door Behind the Door

Australia-native, Los Angeles-relocated Aimee Nash and Scott Von Ryper, the duo behind The Black Ryder, released their stellar psych-rock/alt-country noir debut album, Buy the Ticket, Take the Ride, back in 2009/2010. The follow-up, to The Door Behind the Door, bows on the duo’s own label, The Anti-Machine Machine, on February 24th. Aimee and Scott have distilled their experiences that shaped their journey over the past six years between album releases into a nine-song cycle on The Door Behind the Door. They’ve stated that it’s a deeply personal representation of the highs and lows they’ve lived through over that time period, but it also can be interpreted as an exploration of the universal cycles of love and loss and of life and death.

Aimee and Scott’s aim is to lead the listener through this journey over the course of The Door Behind the Door. The song progression is a procession through a succession of ‘doors’, each opening further into the hidden, enigmatic nature of the psyche that exists within each person. Aimee and Scott illuminate this inner realm, expressing its intangible essence through sound. They capture the high points of their journey through uplifting compositions filled with extended synth lines and organ notes and diaphanous, dulcet, and lofty choir vocals. Times of turmoil are reflected by scorching electric guitar lines and what sounds like looped-backwards reverb noise that recalls the warped displacement of certain My Bloody Valentine songs. On occasion Aimee and Scott display a dark-shadows/dawning-light duality within the same tune through the use of understated acoustic guitar refrains and sustained symphonic strings.

The instrumental “Babylon” starts the album down a distressed and fiery path of sharply skeining, crackling guitar lines, mild tribal drum beats, and sporadically knocking clops. The sonic dissonance brews a feeling of being lost in a netherworld, while the steep scaling of reverb guitar distortion creates the belief that there is hope of escape. Ascension arrives in the form of the gracefully rapturous “Seventh Moon” which is imbued with expansive, sliding strings that slowly reel skywards. The song is centered by a stately drum pace, the tick of drumsticks on cymbals, and subtle organ touches, but also floats entrancingly on Aimee’s gauzily breathed out vocals, chiming guitar notes, and winding strings lines. The addition of deeper and heightened strings and a gospel choir elevates the emotions to a state of blissful euphoria and renewal.

The glorious flow is brought back to earth by the ruminating “The Going Up was Worth the Coming Down”. It begins as a quiet interlude of two glistening, finger-picked acoustic guitar refrains, with one line played at a faster pace than the other. Scott muses reflectively that “I give you all / except what you wanted…” against short, repetitive bursts of synths and a steady drum beat. Delicately murmured dual “Oohs” from Scott and Aimee precede the introduction of a low-key electric guitar line and gently rising synth notes. The gradual addition of instruments and build up in intensity broadens the song, but a swift segue (The closing of a door, or opening of another door?) into an unexpected ending disconcerts. The sudden descent into upheaval includes looped-backwards tape feedback, along with string frisson, phased guitar, lightly battered drums, and cymbal crash.

The left-in-the-lurch feeling is soothed by the dreamy balm of “Let Me Be Your Light”. A hypnotically off-kilter intro of strings, dazed synth warp, and crackling fire slides into Aimee’s softly distorted, windswept vocals that mimic the sound of haunting bamboo flute. Her main vocals are hushed, but clear as she sings in a beguiling tone against a languorous bass line, drum beat, and cymbal shimmer on the verses. The chorus expands into a radiating miasmic glow of guitar chime, drifting synths, and supporting wordless vocal choir as Aimee sings “Let’s dissipate as it’s time to fall / We will rise into the dawn.” Lower-register symphonic strings and the clang of heavy bells signify the end of the song, and possibly the end of a life, or maybe of a new beginning…

The smooth sonic flow is again disrupted by the disjointedly inserted vignette “Santaria”. The Black Ryder gets back into the alt-country noir saddle, a discarded heart riding the lonely plains, treading steadfastly along to an echoed drum thump, short, highly repetitive guitar motif, and scattering of bleak lyrics. Scott proclaims in a rueful, but defiant tone that “I took my own chance / and I was wrong.” as Aimee shadows Scott’s vocals in a muted tone. A fiery guitar burn rears its head, reminiscent of the vivid drone on Buy the Ticket, Take the Ride, turning up the smoldering embers to a blazing flame amid sizzling splashes of cymbal crash.

The alt-country vibe continues on “Throwing Stones” before it shapeshifts into a Primal Scream-like, but stripped-down, rave-up. Fingers glide over acoustic guitar strings while a second acoustic guitar materializes, playing the same refrain. Aimee sings in a dusky, but sultry tone “Let your love shine on / if you want to be free.” alongside sustained organ notes, shaken maracas, drum beat, and cymbal smash. A buoyant gospel choir sweeps in, mirroring Aimee’s positive-themed message to “…slow down / move on to some higher ground / Not too late to get through…” Electric guitar riffs and swelling organ uplift are progressively added to create an exalted, communal experience in the church of rock ‘n’ roll. Yes, maybe it’s possible that love, and/or music, can save a soul!

The hazily cocooned, unhurried comedown of “All That We Are” melds acoustic guitar strum, My Bloody Valentinesque warped-weave sonics, and androgynous, sedated, way-too-buried-in-the-mix vocals from mainly Aimee, and, once in a while, from Scott. Amid all the subdued broiling distortion and plucked acoustic guitar, bright organ notes and a high-in-the-sky planing synth line glide by. The song is suffused with a diffuse aura of rest, sleep, peace, and maybe an acceptance of the journey and its inevitable destination…

But the journey hasn’t ended quite yet… Night approaches and the disquieting lullaby “Until the Calm of Dawn” tries to reassure with pretty music box notes and pulled symphonic strings. But Scott’s disembodied vocals disturb as he sing-talks about “Nightmares… / blank stares / don’t feel no more…” amid music box tinkle and bittersweet strings. Higher register, spectral theremin lines tremble as Aimee comes in from a distance, sing-talking Scott’s exact phrases which include “Don’t cry / Don’t hurt yourself / Hold on to somewhere else…” Cold comfort indeed! The Door Behind the Door draws to a close with the elegiac instrumental “Le Dernier Sommeil (The Final Sleep)”. Extremely drawn out, suspended symphonic strings that deepen in tone to a profound grandeur form a bed while a mournful, poignant cello line slowly wends its way to its eternal resting place. 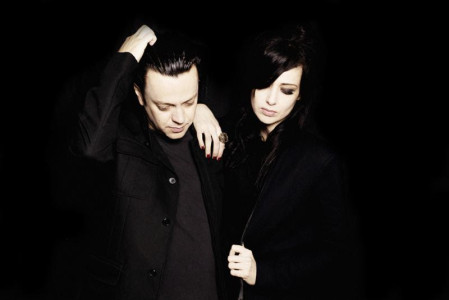 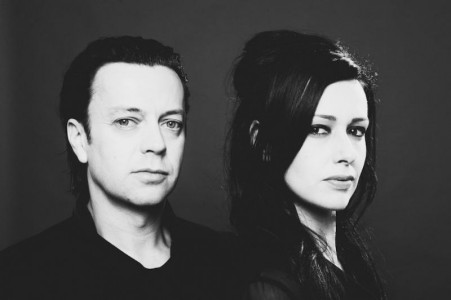 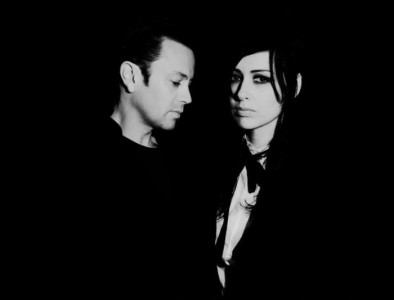 Our Interview with The Black Ryder 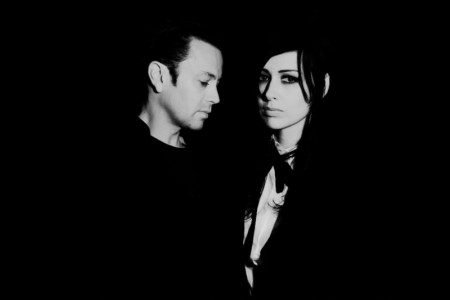 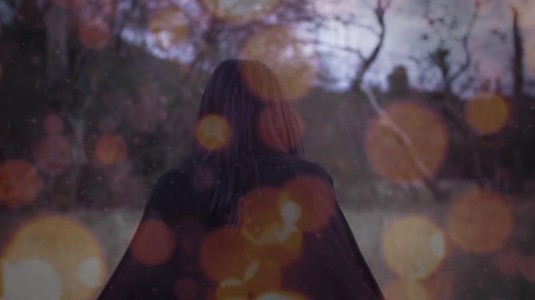