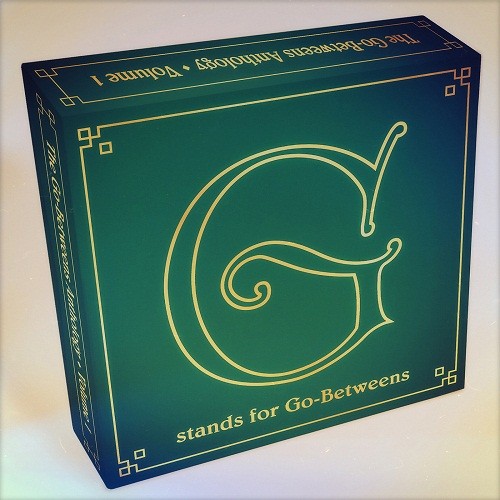 For those out there that have never heard of The Go-Betweens, but now want to hear everything by The Go-Betweens, Domino has you covered—at least, until the half-way mark. So seems to be the logic behind G Stands For Go-Betweens—Volume 1, a $160 box set with more music by a single band than any one person can process in a single sitting. Containing three vinyl remasters of their original studio albums, one vinyl compilation of early singles, and not one but four CD’s full of B-sides, demos, and live recordings spanning the band’s output from ’78 to ’84, it’s hard to describe exactly how gargantuan the included library in this package is. Not to mention, the pack comes with plenty of collectible trinkets and goodies to make that price tag even more aluring.

G Stands For Go-Betweens is a pretty shining example of exactly what music nerds hate about box sets. The Go-Betweens, who were a fairly influential Australian band formed in ’77, have had a long-standing impact on both indie rock in general, and the sound of modern Australian music specifically, but after reuniting in 2000 haven’t been active since one half of their songwriting talent, Grant McLennan, passed away in 2006. It could be seen as a bit of a cash grab for Domino to decide, some eight years later, that the band had melted so completely back into the “vintage” category at local record stores that a repressing of almost half their entire discography would be warranted. The two specific kinds of people that will be interested in a collection of this staggering intensity are extremely dedicated fans that just can’t resist the notion of yet another remastered album or three to add to their collection, and millennials that want to kick-start their new obsession with obscure Rolling Stones-inspired exotic rock music.

That is certainly not to say that The Go-Betweens don’t deserve more time in the sun: their impact on Australian music can’t be undersold, and it really is a unique treat to get to listen to so many unearthed tracks fresh from whatever vault they were dug up from. This review focuses on the digital portion of the set: the 4 CD’s collectively titled Unreleased & Rarities, a combination of essentially every unheard song, or version, the band produced in the first half of their pre-breakup career. For the uninitiated, this most definitely isn’t the right place to start when exploring The Go-Betweens for the first time, since one word overpoweringly describes this collection over all others: overkill. Over a total of 70 tracks, the jangly Oz band goes through more musicians than Godspeed You! Black Emperor or Broken Social Scene (13 before ’84), and as a result there is a massive amount of inconsistency behind the band’s very strong singer-songwriter duo of Robert Forster and Grant McLennan. The songwriting dynamic between the two is as impressive as ever listening to radio recordings and B-side singles, but that is almost the only thread tying Unreleased & Rarities together, making it less an accessible album than a super-fan’s favourite archival collection.

Each CD contains a different era of tracks, with disc one devoted to ’78-’79 and disc four ending at ’82-’84, with a live recording taking up the whole of disc three. On paper, it makes sense, but in practice the recording quality varies so wildly between discs that it’s hard to believe the band on track 60 is the same as the one you started listening to on track one. In particular, the pre-1980s output is classically thin and quiet in comparison to the rather rich production on the proceeding discs, and audiophiles who leave this album on repeat will be scrambling for the volume dial at the end of the first CD.

The Go-Betweens were a phenomenal band with a rich history and a dynamic output of music over a decades-long career. To some, the idea of owning (half of) everything they’ve ever put out in a slightly remastered format will be undeniably appealing—but for everyone else, this isn’t the right way to delve head-first into their amazing discography. For the superfans, there is G Stands For Go-Betweens—Volume 1, but for everyone else, this box set is an unnecessary cash-grab.