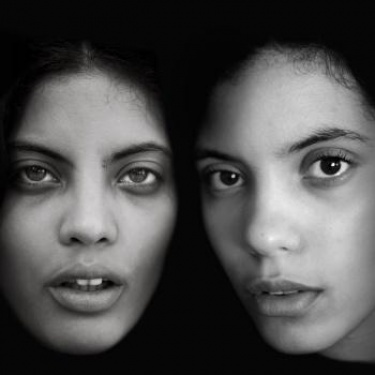 A sense of unity, of combining two worlds crops up as a constant catalyst on the eponymous debut album by Ibeyi. Firstly, Ibeyi are French-Cuban twins Naomi and Lisa-Kainde Diaz, whose father was Cuban percussionist Miguel ‘Anga’ Diaz famed for playing with Buena Vista Social Club. Secondly the siblings fuse together the contemporary with the traditional; electronic blips and chirps merge with organic percussion strikes. Thirdly, Naomi and Lisa-Kainde opt to sing in both English and Yoruba – a Nigerian dialect that travelled through Cuba during the 1700’s normally associated with slave ships.

The pair’s sparse arrangements and fondness for simplified percussion gives ‘Ibeyi’ a chain-gang aesthetic which in turn pays homage to the Yoruba culture the twosome hold dear. According to the twins their sonic pick ‘n’ mix is “contemporary negro spiritual” – which is evident when Ibeyi delve into a verse of pure Yoruba accompanied just by a ripple of clip-clopping organic beats. The album’s primitive nature is its strength and its appeal; there’s an earthy nature to this debut LP which is attributed to the power of just vocals and simplified thuds and thumps. Even with an added layer of synthetic noises the LP still maintains a stripped back personality, the use of space is akin to how The xx build rousing atmospherics with meagre components.

At its heart ‘Ibeyi’ is a very human album – there are themes of catharsis, love and the kind of notions that are just skin and bone. Recent single, ‘River’ quivers with a hymnal, almost biblical refrain “I will baptise my soul with the help of your waters”, while ‘Oya’s euphoric swell finds the twins searching for natural beauty in the world “even if I feel the sun on my skin everyday/if I don’t feel you”. ‘Ghosts’ is where Ibeyi become reflective of this place we call home and what’s happened to our habitat “Welcome to my earth/it’s a crying shame/we have built a foolish world/busy fighting through the lying and denying”. Whereas ‘Singles’ comments on matters that centred around solitary feelings and nods towards relationships “being alone is what I dread/no warm hands reign in my bed”.

It’s a big melting pot that Ibeyi dine from but these polar ingredients and disparate influences blend together to offer up something that’s undeniably pop but with a refreshed, beguiling flavour.