Shrink Dust is a flying, shining testament to the single unifying thread that is Chad VanGaalen’s unimpeded creative freedom. Recorded, as with all his previous releases, by his lone self in his Calgary home/recording studio, Shrink Dust once again explores the Albertan’s fleeting whimsies funnelled through his musical prowess.

Self-described as a country record, VanGaalen’s fifth album under his own name does indeed borrow some templates from the greats—most notably on the beautiful crooner “Lila”, which leans on some weirded-up Neil Young for the sparse intro. Heavy use of the pedal steel throughout the album may be the reason VanGaalen chose to label the dozen tracks as a country offering, but temperament and tonalities change so frequently from song to song that it’s hard to imagine Shrink Dust falling into any single category.

It’s hard not to fall in love with Chad VanGaalen’s sense of romance and carelessness. The effortless way that the solo artist blends harmonicas, fuzzed-up guitars, reverb-soaked or bone-dry vocals and nearly timid drum-work into songs about death and love is remarkably attractive. So many records performed by just one man come off feeling like a single tangent, with each instrument played with the same hooks and rolls; not so with Shrink Dust, where each new sound is fresh and startling and simply, and refreshingly, joyous and fun. Even at his most sullen, VanGaalen never sounds dour or engrossed in his work—instead, he soars in front of ridiculous bass warbles (“Monster”) and tin-can guitar leads (“Evil”) in a victoriously happy daze. Rocker “Leaning On Bells” is one of the few genuinely fuzzy songs on the whole album, but its straight-up blues riffage is one of the few sounds on the record that doesn’t mesh with the wacky pedal-steel slides that tie the rest of Shrink Dust together.

Ultimately, Shrink Dust isn’t just a great addition to VanGaalen’s expanding catalogue of beautifully-crafted solo material, it’s the highlight of his now 10-year career under Sub Pop. While it doesn’t change the formula significantly from 2011’s Diaper Island, it’s a fantastic refinement of the musician’s charm and eccentric sensibilities. There hasn’t been a better record in recent memory that has managed to be as fun as Shrink Dust is without also being senseless or contemporary: VanGaalen’s manages to skirt these boundaries wide, providing a long-play perfect for summer this year, and each year to follow. 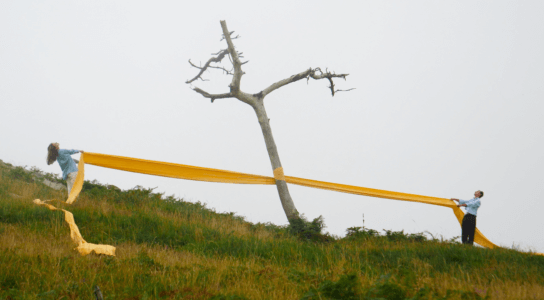