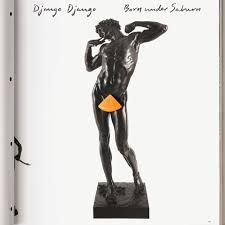 The British rock band Django Django are to release their second album Born Under Saturn this month out on the Because Music label. Based in London, the quartet met at Edinburgh College of Art and formed in 2009. The band is comprised of David Maclean (drums and production), Vincent Neff (singer and guitarist), Jimmy Dixon (bassist), and Tommy Grace (synth).

Opening track “Giant” is a fast, rhythmic track with a unison of vocals chiming throughout before “Shake and tremble” sees tambourine and keys- it’s a pushing indie anthem that has a more noisy essence which matches the titles and the lyrics too; “smoldering eyes at night floating in darkness”. In “Found you” a deep bass line runs underneath scrapes of percussion and the ever so harmonic vocals; “take one final last look around you, you’ll never know just how I found you”. Instrumental are regular and certainly have an edge to them, the hollow notes sounds as if they are coming from an old organ.

Electronic beats introduce the catchy “First light” and keep pushing the pace forwards. The first single from the release, it has a memorable chorus: “First light, the fields are ablaze, cut through the maze, lighting up quicker, each day never the same, never again, getting the picture.” “Reflections” sees an interesting repetition of synth mixed with a steady beat, the lyrics make comment on the questions surrounding wealth and happiness; “I tried to live a perfect life covered in gold…” and “Reflections hurt my eyes… please cut me aside, glimmer in the sun, the billions comes undone”. Saxophone breaks in unexpectedly later on – it’s a very danceable track.

“Shot down” contains a similarly deep beat that has the potential to turn into something heavier, however no such destination is reached – the track sees more indie lyrics and a melody travelling up and down. “4000 years” is a rock track with a steady drum beat and forceful delivery whilst “Breaking the glass” runs afterwards very nicely. The latter is filled with quick, spat out melodies.

All in all, Born Under Saturn is a great mix of indie electronic pop music with hints of some more experimental edges. It’s nice to hear these points of difference but Django Django still stay safely within the indie realm. Indeed, they’re not doing anything vastly unique, but what they are doing is making optimistic, easily listenable indie music, and they’re making it well.