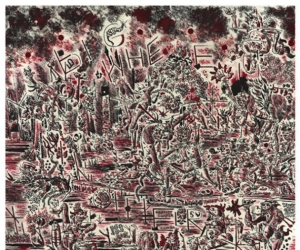 Big Wheel and Others

American nomad Cass McCombs turned a lot of heads when he released two full-length albums in 2011, Humor Risk and Wit’s End. He made sure that attention was captured when, at the end of that year, he released the protest song “Bradley Manning” in defense of a martyr for the cause of accountability. For a moment, it seemed that McCombs might be heading in a true Dylan-esque political troubadour direction, but, like Bradley Manning, Big Wheel and Others doesn’t do exactly what it’s supposed to.

Rather than chasing the political dragon, McCombs delivered of a more spiritual record, rich with his trademark character studies and love ballads. Helping to give the album form are three samples from the 1969 documentary Sean, highlighting sections where four-year-old Sean Farrell discusses his enjoyment of ganja, his disbelief in God, and his distrust of police. While McCombs helped to score the documentary’s sequel Following Sean in 2005, the inclusion of these samples speaks to something deeper than self-promotion. There’s something in Farrell’s assured delivery, a clarity of vision beyond his years as yet untainted by the crippling doubt of the western world. Like Manning, Farrell is the kind of character that speak to and of McCombs.

When you listen to McCombs sing on his seventh studio album, his words search with that unfiltered awe with which Farrell saw the world, and deliver the truth with the unblinking guts of Manning. After all, it’s the same guy that asks, “What’s it like to shit in space?” on “Morning Star” who goes on to catalog the worst racial stereotypes on “Everything Has To Be Just-So.”

Running almost an hour and a half long, a sprawling 22 track double LP, Big Wheel and Others is nearly as long as his last two albums combined. In that time, he covers a lot of ground, from alt-country and blues-rock to folk and singer-songwriter, all wrapped up in a warm nostalgia for the ’70s. Imagine Elliott Smith or Conor Oberst (Bright Eyes) on Xanax, their extreme personalities reigned in and focused on making more polished, less aggressively personal records.

With an album this daunting in size, flow is something of an issue, but there are a few moments that break through and almost make themselves unforgettable like “Country Line” did on Wit’s End. Rambling title track “Big Wheel” is one of those moments, as well as the tale of an unreliable drug dealer called “Joe Murder” (where he emotes “burned my wallet / purged my soul”), acoustic guitar track “Dealing,” where his themes of drugs and cards merge in a most Elliott Smith like fashion, and the repentant “Honesty Is No Excuse,” which contains a righteous electric guitar solo.

A key exchange happens between the two versions of “Brighter” on this record. Where the original is a relatively plodding alt-country track, the use of noted actress Karen Black (Easy Rider, Nashville) redeems the track with her haunting voice, made even more poignant by her passing in August of this year. One has to wonder why the original was included on this album at all.

By the same token, “There Can Be Only One” has a structure like John Lennon’s “Bring On The Lucie (Freda Peeple)” with a little Harry Nilsson scat thrown in for flavour, but doesn’t quite push through to match the greatness of its influences. There isn’t anything here that sounds like such an instant and eternal hit as “Country Line” or as socially penetrating as “Bradley Manning” was. While Big Wheel and Others is undoubtedly a good album, and a welcome addition to McCombs’ impressive catalogue, there is a lack of editing and hooks that holds this back from being his best work.