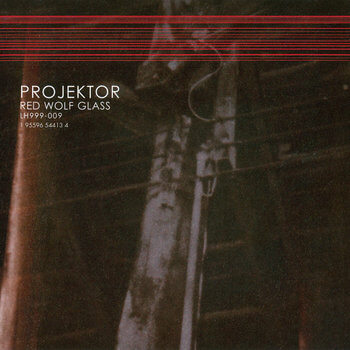 Winnipeg post-rock/shoegaze outfit, Projektor may have disbanded back in 2006, after starting life in 1999 but their heart still beats as Locust Hall gear up to re-release a deluxe edition of their 2001 debut record ‘Red Wolf Glass’. The 2020 re-issue includes three bonus tracks, which consist of a radio edit of LP opener ‘Foxfire’, a demo of ‘Double Dragon’ and a non-album demo of ‘Fahrenheit’. The latter is a song that was demoed as part of the album sessions but didn’t end up on ‘Red Wolf Glass’. Off the back of 2001’s release the band headed out on several tours with the likes of Moneen, Eric’s Trip and The Waking Eyes, while playing a clutch of festival performances and TV spots. Various mementos and keep sakes from the record’s inception and lifespan are chronicled as part of a digital booklet that accompanies the re-issue. Like unearthing a time capsule, the retrospective document displays a host of gig posters, press cuttings, photos, handwritten lyrics and various other titbits that hark back to when ‘Red Wolf Glass’ was released, serving as a key supporting piece to the album.

The quartet’s sound has often been likened to Coldplay, Radiohead, Doves and Swervedriver, as according to the press release Projektor were inspired by “Brit-pop, shoegaze and post-punk”. These comparisons are omnipresent given the outfit’s penchant for expansive soundscapes, that start off small but blossom to widescreen proportions, albeit with a knack for a sly hook here and there, like an audio Easter Egg wanting to be discovered. While there’s an Anglophile proclivity found throughout the album, Projektor’s sound also steers close to Sacramento metal innovators, Deftones. Not so much in the case of musical brutality but in the way Projektor create ambience and space with deft nuances and textures. It’s these facets that coalesce, multiply and swell that gives ‘Red Wolf Glass’ it’s grandiose yet emotional sound. Add in Jahmeel Russell and Dustin Leader’s earnest tones, this added layer of warmth and comfort combines with the shapeshifting sonic waves found throughout the LP. All songs lead to the record’s closer ‘Beautiful Skin’; the delicate touches are there but as the album draws to a close, the Winnipeg unit unleash a hefty dollop of gloves off aggression, serving one last piece of bombast before the listener is ushered into the album’s bonus materials.

As far as deluxe re-releases go, it crystallises a period in time for Projektor, one that early devotees will cherish, and later adoptees will enjoy uncovering.