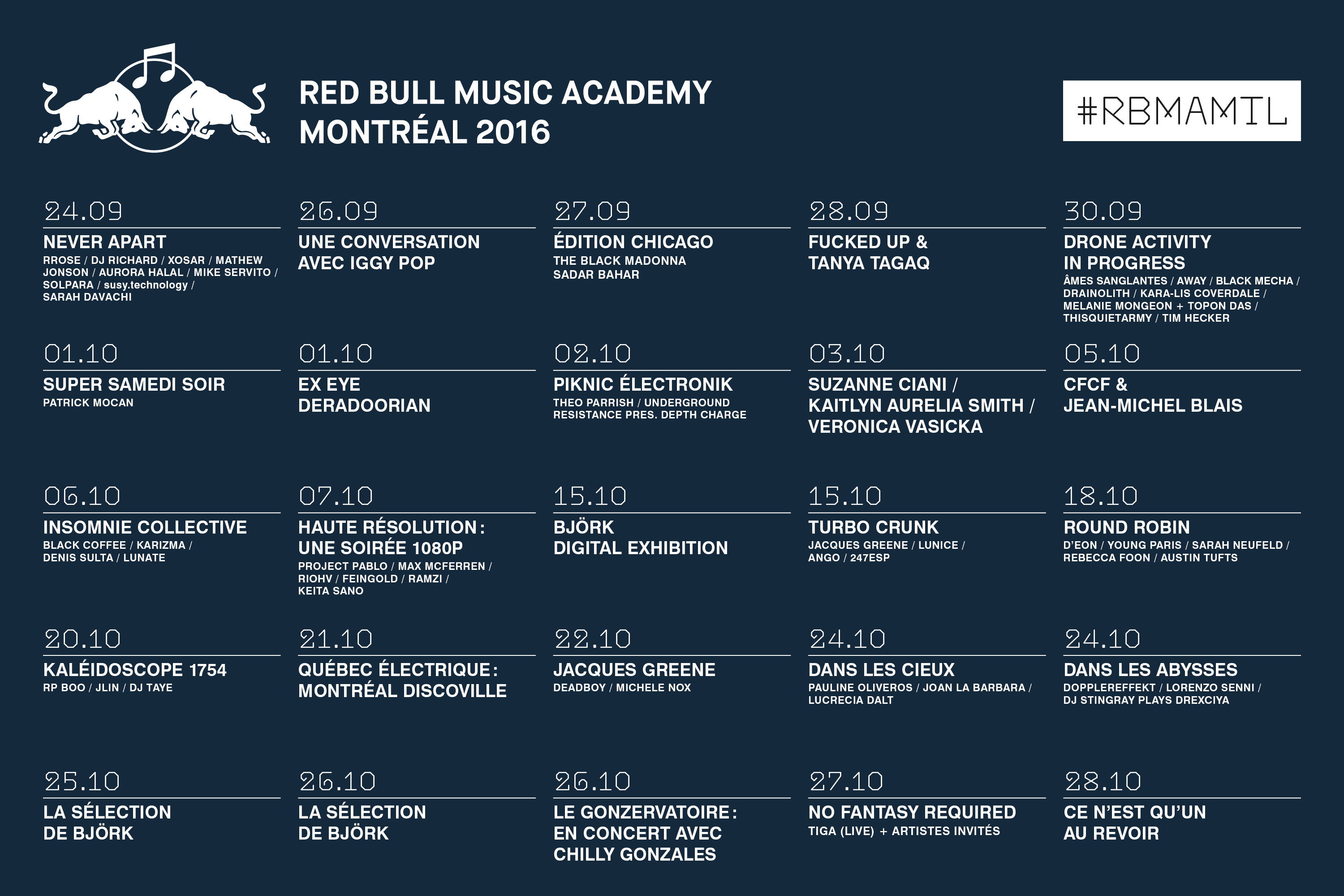 From September 24 to October 28, the Red Bull Music Academy will touch down in Montreal for the exploration of Canadian and international music culture, featuring events, club nights, performances, public lectures and a special VR exhibition.

Since 1998, the world-travelling Red Bull Music Academy has been documenting music history, while simultaneously adding new chapters to it through its network of events, lectures, editorial content and radio programming. Taking root in cities like Berlin, New York, Tokyo, Paris, São Paulo and Cape Town, the Academy has been nurturing local music scenes for almost 20 years.

Montreal has been at the epicenter of Canadian artistic experimentation for decades, which makes the city an ideal fit for the Red Bull Music Academy. With its multilingual makeup and multicultural vitality, Montreal supports a booming art scene that has nourished creativity of all shapes and sizes – from thriving metal and experimental music scenes to leading edge contributions in video game design and animation.

Phi Centre, the multidisciplinary arts and culture hub that will serve as the home base for 70 hand-picked Academy participants from 38 countries, is an outstanding example of Montreal’s innovative, inspiring and inclusive approach to culture, providing an eclectic range of programming throughout the year. Over the course of the month-long Red Bull Music Academy, Phi Centre will provide the infrastructure for the Academy’s recording facilities and private lectures. Phi Centre’s sister location, the DHC/ART Foundation for Contemporary Art, will host a virtual reality exhibition revolving around the extraordinary visual output of Björk.

The Academy has commissioned the Icelandic artist’s latest VR video, following similar collaborations with New York’s MoMA, Vivid Sydney, Tokyo’s Miraikan and London’s Somerset House. Starting on October 15, Phi Centre visitors will be invited to immerse themselves in the Björk Digital Exhibition, featuring all five of Björk’s VR videos, her interactive Biophilia app and screenings of her inimitable music video oeuvre. Later in the month, Björk will also be DJing on back-to-back Academy nights.

The event program will also extend to a wide range of iconic locations throughout the city. Ludger-Duvernay, Canada’s oldest theater inside the Monument-National, provides the backdrop for an extended conversation with Iggy Pop, the godfather of punk music and one of the most enduring artists and performers of our times. Harkening back to the glory days of cabaret, the intimate concert hall La Tulipe will house the world premiere of an eruptive collaboration between experimental Toronto hardcore punk outfit Fucked Up and Inuk throat singer Tanya Tagaq.

2,500 celestial bodies in the star field of the Montreal Planetarium will provide the setting for a deep listening experience led by pioneering electronic composer Pauline Oliveros, vocal experimentalist Joan La Barbara and Lucrecia Dalt, part of this year’s team of studio tutors at the Academy. The event is then going to shift focus to a different listening experience that will be immersive in its truest sense: Inside Montreal’s most iconic pool, the audience will be treated to an underwater sound experience, featuring a custom-built soundsystem, a specially commissioned piece by Lorenzo Senni, a Dopplereffekt live set and an all-Drexciya set by DJ Stingray. Bring your bathing suits!

The Academy program will also pay tribute to numerous cornerstones of Canadian culture in general and Montreal music in particular. For its opening night on September 24, RBMA teams up with the Never Apart cultural center to present a night of cream-of-the-crop techno and house music, featuring Rrose, DJ Richard, Xosar, Aurora Halal, Mike Servito, Mathew Jonson and more. Montreal’s influential Turbo Crunk party will be revived for the opening night of the second Academy term on October 15, bringing together the founding group made up of Jacques Greene, 247esp and Academy alumni Lunice and Ango.

Piknic Électronik, Montreal’s prime outdoor destination for electronic music in the summertime, will host a Red Bull Music Academy Special on its closing weekend, headlined by esteemed Detroit selector Theo Parrish. Celebrated Canadian tape and digital label 1080p will bring their strong roster to Artgang for a label night, and two of Montreal’s Tiga and Jacques Greene, will present their new live shows as part of the Academy program. Even Canada’s national sport will be represented: an ice skating jamboree on October 1 will translate the roller disco concept to more slippery territories.

Québec’s influential metal scene will be at the core of one of the Academy’s signature event formats: Drone Activity In Progress first premiered at the RBMA New York in 2013, and this latest edition will assemble some of the most exciting artists from the local metal circuit, as well as connecting the dots to related forms of experimental, noise and drone music. Pierre-Marc Tremblay of legendary Québécois black metal outfit Akitsa presents his Âmes Sanglantes power electronics solo project, Away, drummer and album art designer of thrash metal giants Voivod, will give a rare solo percussion performance, and Melanie Mongeon + Topon Das of Montreal grindcore band Fuck The Facts will present their first show as a duo. The lineup is rounded off by a specially commissioned sound and light show from Tim Hecker, as well as Kara-Lis Coverdale, Thisquietarmy, Drainolith and the debut performance of Black Mecha. Another Academy favorite taking place in Montreal, which debuted in New York in 2013, is Round Robin, which will bring together a wide range of artists from different genres for a night of improvised duets.

As the event program unfolds at Phi Centre and throughout the city, the 70 hand- selected participants — a highly international group that includes Baton Rouge producer Suicideyear, Norway’s bass hotshot Drippin, Mexico City’s goth-pop songstress Dani Shivers, Berlin-based Chinese experimental artist Pan Daijing, Canadian representatives Marie Davidson, River Tiber, Sayge, Casey MQ and Angus Tarnawsky, and many more — will attend the Academy’s signature lecture program. While the lectures will neither be announced nor open to the public, the video recordings will be uploaded to the Academy’s digital hub. The participants will furthermore use the Academy’s state-of-the-art recording facilities to collaborate on music together, while a team of studio tutors including Just Blaze, Deradoorian, Matias Aguayo and Lucrecia Dalt will provide mentoring help, and work side-by-side with the Class of 2016 around the clock.

Alight will also be shined on innumerable artists and genres that have influenced and continue to define Canadian music past, present and future, in addition to long-form pieces that hone in on some of Canadian music’s essential stories. These essential stories from Montreal and beyond range from the history of Quebec’s hip-hop evolution and the rise of Montreal’s rave scene to special Nightclub- bing essays on Montreal’s most esteemed clubs and the musical legacy of Refus Global. In collaboration with Montreal’s Booooooom, Red Bull Music Academy has also produced a six-episode animated series, relating the origin stories of when certain Canadian musicians first met and experienced a spark of shared creativity. Among the featured artists will be Peaches, Jessy Lanza, A-Trak, Kaytranada and BadBadNotGood.

RBMA Radio will be broadcasting live from their studio at Phi Centre every weekday at 10AM and 3PM EDT. Tune in for a diverse program featuring the best of Montreal: local scenes, conversations and special guests. At night, select RBMA concerts and club nights will be live streamed.