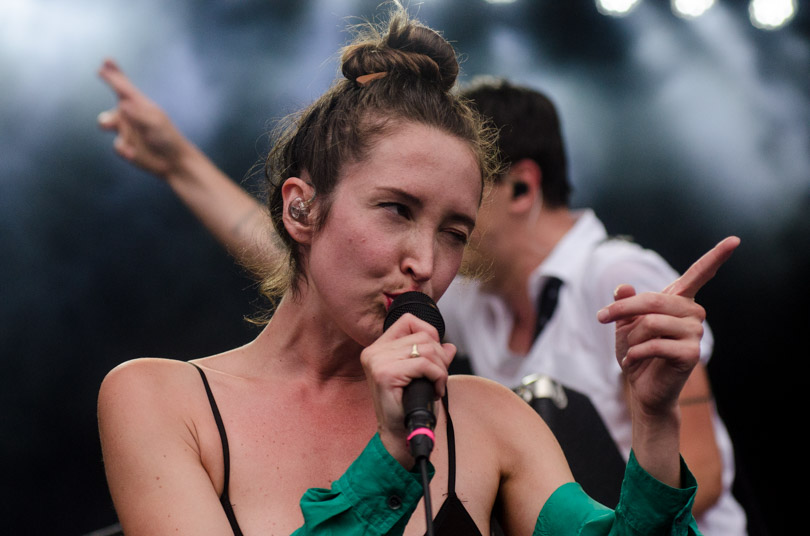 July Talk by Danyca MacDonald @ RBC Ottawa Bluesfest 2017, July 11
Share on TwitterShare on PinterestShare on PocketShare on RedditShare on FacebookShare on Email

After a day off, glimpses of rain weren’t stopping Bluesfest from its best night so far this year. With artists playing from just about every major genre, it was easy to get a mix of legends of the past and legends to be.

It was a little disappointing for the crowd to start the night with ten minutes of pure DJ mixing in Fetty Wap’s 45-minute set. Not boring by any means, it just felt like an unnecessary segment to an already undersized set. When he did take the stage however, he and Monty were lightning in a bottle, bouncing and fist-pumping across the stage, stirring the crowd like a pot of stew. Keeping his set one made for fans, he dropped tracks like “My Way” and alcohol anthem “679” to keep the audience rowdy.

Always a surprise and never a disappointment, these Toronto rockers put on one of their most insane shows to date. Moving around the stage like ghouls, they started with tracks like “Picturing Love” and “Summer Dress” riling up the crowd as much as they already were. Leah took a fan’s disposable camera, taking pictures around the stage with childish glee before handing it back, later running out with a bottle of Jameson to give the fan a very healthy serving of whisky. Holding a microphone with Peter’s teeth while Leah sang, the two had a very Lady and The Tramp way of mixing things up, putting fingers in each others faces and even dragging each other in choke holds mid song, all while smiling, oh and this was for their slow songs. Moving to more upbeat tracks like “Headsick” and creepy renditions of “I’ve Rationed Well” they moved in just as many unnatural ways as they crossed the stage through belly dancing, crawling and rolling at least once. Endlessly thanking Ottawa and Bluesfest for supporting them in their early days they brought out “Push + Pull” to scream their way to an even more memorable set.

Their two decades together reunited has made the Zombies a better band at 50 than they were in 1968, and you could hear it seeing them live tonight. Covering Tom Petty’s take on their classic “I Want You Back Again” founding member Rod Argent shredded his keyboard solos like an animal. Singing with more oomph than on their old recordings, Colin Blunstone’s vocals have aged beautifully, making their new material a strong companion to the hits they forged a career on. Hitting the tracks from their massively successful Odessey and Oracle “Care of Cell 44” brought chills with the vocals on every chorus. Of course it was “Time Of The Season” that sent the crowd into cheers as the band pulled the claps and sighs, and even solos as if they’d recorded the track yesterday. After some covers, they closed on a sprawling 10-minute take of “Hold Your Head Up” complete with multiple keyboard solos before ending on “She’s Not There” to the biggest cheers of the night.