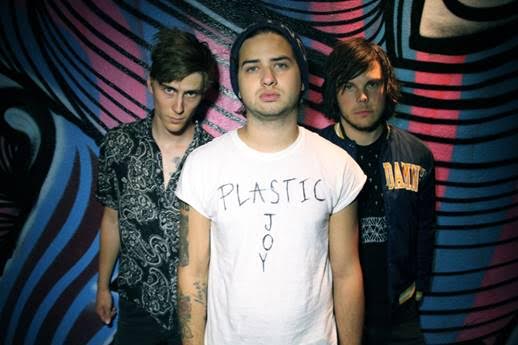 Raw Fabrics have announced the release of their forthcoming release Plastic Joy, the EP is due to come out late summer. The band recently unveiled the album’s artwork and have released the first track “Move Over.”

“’Move Over’ is a song about strength, getting back up, and listening to your heart over all the noise around you,” explains singer/songwriter Jack B. Franco. “It’s important to stay committed to what you want to do even at times when it seems crazy,”

After releasing their debut EP Gold Handcuffs in 2014 and finishing their first national tour, the band headed to the studio with producer and engineer [Morrissey, U2, The Strokes] to record Plastic Joy.

The band originally formed in February 2013 and includes: Jack B. Franco (Singer/Songwriter/Guitar); Player Jon Fredrik (Drums): and Justus Dixon (Bass/Background Vocals). The trio agreed on going by the name Raw Fabrics with the idea that the songs had to be good enough that if you strip all the layers, all the jungle toms, all the extra noise, that they would carry infectious melodies and truth.