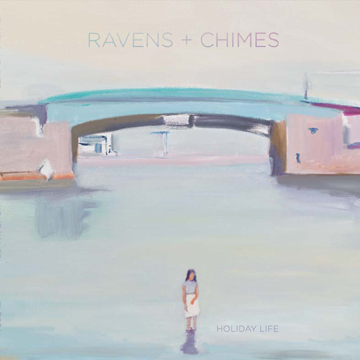 New York art-rock band Ravens & Chimes are to release their second album Holiday Life. Following their debut Reichenbach Falls and a cover of Leonard Cohen’s “So Long, Marianne” which got them praise from Cohen himself, the new album is driven by piano and crammed with fast spoken lyrics. The band have played shows supporting White Rabbits, Frightened Rabbit and The Fiery Furnaces and they show similarities to these bands in their passionate but delicate indie style and in particular to the delivery of The Fiery Furnaces.

The ten track album was recorded with producer and former Arcade Fire member Howard Bilerman and recording engineer Larry Crane. The band is made up of Asher Lack on vocals/guitar, Avery Brooks on keys,
bassist Dave Dawda, Rebecca Rossi on piano/vocals, and drummer Mike Riddleberger. A statement on the band’s blog said about the album; “It took two years and a lot of very hard work and difficult decisions but we have finished recording our second album. Would have written more during the process but we were pretty focused in to the task at hand.”

“Division Street” opens the Holiday Life with steady piano, guitar, and the combination of male and female vocals from Lack and Rossi. For the peak of the song they sing together; “And I may have changed… and the driving rain somehow, somehow never seems to end…and the darkness came and covered over all the things we are”. Rossi’s vocals combine well again in “Arrow”, she backs him word for word whilst piano is at it’s loudest of the album.

Ravens & Chimes’ lyrics catch attention throughout; in “Past Lives” Lack sings “And we watched the rain come in low all afternoon, and the cover the light ‘til the walls were casting blue”, strong piano instrumental builds and lift the song before it slows and lyrics are spoken more softly “when you’re standing in the doorway and coming on real strong…”. In most of the songs and especially in “The Parting Glass” Lack’s lyrics are produced in a talky, conversational style more than sung. “Night” is a needy track, “I would leave it all behind if you let me spend the night with you…oh let

me spend, the night with you” Lack pleads whilst “Fox Gloves” is another sadder, slower song hinting at experience dealing with illness; “Will you be spinning, maybe dancing, getting thinner, getting thinner” repeats the chorus.
One of the tracks “Clarissa Explains It All” the title is a reference to 1990s American teen sitcom of the same name. The song has no relevance in any obvious way but could perhaps be a reference to the emotional teen problems she addresses in her show. After all, the Holiday Life is full of adolescent like emotions – longing, change and growth – emotions everyone can relate to.