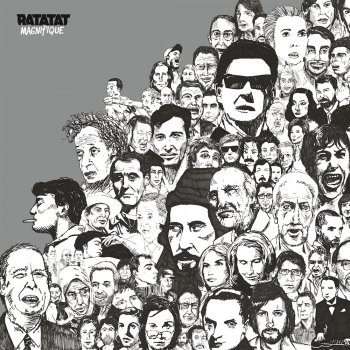 Ahead of their fifth studio album Magnifique (out July 17 on XL Recordings (US) Because Music (Europe)), RATATAT have released a music video for their new single “Abrasive.” Rich with the signature RATATAT guitar sound, “Abrasive” is one of the densest song’s the duo has ever made. Sometimes reaching as many as 30-layered guitars, each playing a different part but all still in harmony with each other. The animated video, directed by RATATAT’s own E.VAX, is equally as dense using over 4000 hand drawn illustrations by E.VAX, some even taken from the bands recordings sessions for Magnifique.

For Magnifique RATATAT returns to their core guitar-driven sound, which they spoke to Spin about in-depth recently. Recorded over the course of the last four years in various studios in different locations including Jamaica upstate New York, Long Island, NY and their home studio in Brooklyn, they recently talked about the lengthily recording process to in Spin Magazine “Because it’s instrumental music, you can’t just be half-assed with the music and then like, ‘Oh someone will sing on this,’” says Mast. “It makes it a bit more of a challenge.”

After a string of underplay shows across the mid-west, leading into a close out performance at this years Coachella and Governors Ball music festivals, the duo has announced a NYC album release show at Webster Hall on July 17 and a string of more North American dates in September.