Races – Year of the Witch 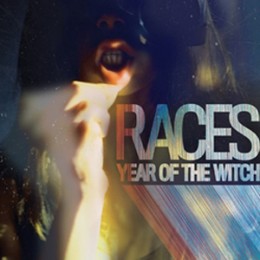 Grandiose. What does that word mean? For me it’s always had a negative connotation. For me, it describes something that is needlessly complicated. Mere seconds into the new Races LP, I’m overtaken by the feeling that the record is needlessly complicated. Certainly, every critic has their personal tastes, and it’s important to not let those tastes dictate a critical response. But is the string section really necessary, guys?

Races could benefit greatly through the use of Simplification Through Amplification. This is a device used in cartoon and comic drawing: the artist spends time figuring out the most unusual and interesting features in a person’s face, then strips away all the other useless noise that would only bog the rendering down. Bells and whistles, when used appropriately, make me smile. No vendetta against them. But there’s a time and place for them, and the high level of production on so many indie records today does not serve to increase their enjoyability or accessibility.

Take the new Tennis LP. I had their debut Cape Dory record pinned after about halfway through my first listen. Nostalgic indie-surf-pop. Clean production. Boring. My co-worker tossed their new disc, Young & Old in the player last week without telling me who it was. It sounded rough. But gloriously so. I seriously had two or three “Who is this?” moments. I could pick out the elements quickly: Overdriven vocals. A keyboard. A guitar. Drums. That’s all you need.

Getting back to Races. Their album is called Year Of The Witch. Due to my strict policy of having as little outside knowledge of the record as possible while reviewing it, I am assuming the title is not a reference to some kind of concept record they’re doing here–not that it would be hard to believe.

Singer Wade Ryff’s voice drawls in an unconvincing tone. He’s obviously referencing something, and I’m not sure what it is, but it doesn’t excite me. Some kind of 70’s rock hero? His backup girls provide remarkably skilled aid to the song, but it’s still corny as hell. “The Knife” features a plinking piano as an ode to some kind of bar room ballad that admittedly employs some killer descending guitar parts; but again, the whole overproduction just feels like necking a girl with too much makeup. It can be fun, but it’s not fulfilling, if you want to know the truth.

Having knocked the band down several pegs, this band is onto something. Dude does know how to write pop hooks. “All For You” is a damn fun song, and I’m willing to look past that stupid voice he insists on crooning to realize the sensibilities are kind of perfect from time to time. Unfortunately, I doubt we’ll ever get the opportunity to see this songwriter’s true potential–anyway, I’ve never seen someone go from hi-fi to lo-fi. Whenever that happens (see Atlas Sound) it comes across to me as pretty stilted. Too bad. This record could’ve been way shreddier.