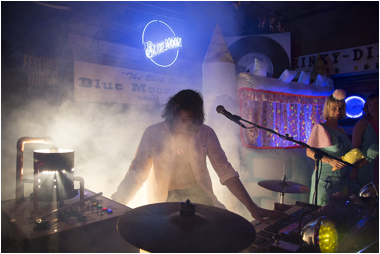 Quintron and Miss Pussycat are excited to head out on the road and bring their incredible live show to a city near you. Alongside this, they both have two new projects; Q’s Weather Warlock and Miss P’S new puppet soundtrack album Anthropomorphizer.

They’ve have been making genre-defying noise and hard rocking dance music in New Orleans for over fifteen years. The majority of their 14 full-length albums have the psychedelic soul of traditional New Orleans party music filtered through a tough distorted Hammond B-3 and a cache of self-made electronic instruments
The Quintron / Miss Pussycat experience is one of barely controlled electronic chaos, “Swamp-Tech” dance beats, small explosions, incredible clothes, and entertaining puppet stories. You can see them perform regularly at the SPELLCASTER LODGE New Orleans, Louisiana or on one of their many tours around the world. This act somehow has equal relevance in sleazy nightclubs, pizza restaurants, and university lecture halls.”

Side B presents the Weather Warlock instrument alone in the drone zone – doing its solo thing during a very active and stormy New Orleans sunset with Quintron occasionally tweaking the controls in harmony. The resulting music is basically a greatest hits of what mother nature and Weather Warlock are capable of by themselves.

It should be noted that although the core members of this band are fairly regular – Q and Gary Wrong on guitar / Aaron Hill on drums – the live show lineup is anything but constant. The touring version of Weather Warlock always includes improvisers and musical luminaries from whatever city the band happens to be in. A recent NYC lineup included Steve Shelley, Nels Cline, Sean Ono Lennon, Paula Henderson (Sun Ra Arkestra), and Luke Smith (Sun Ra Arkestra). The Miami lineup included noise guitar legend Rat Bastard, two DJs, and a Cuban percussionist.

Miss Pussycat has joined forces with Terror Vision Records to release a new puppet show album ANTHROPOMORPHIZER, a selection of live puppet show sound tracks. The LP release is nestled in a tippon gatefold cover with limited copies pressed to translucent purple and pink blob vinyl . She is also working with Terror Vision to release three of her puppet movies on VHS, the first of which is THE MYSTERY IN OLD BATHBATH (starring Trixie and the Treetrunks).

To kick off the next round of tours, Miss Pussycat has a new live puppet show, ‘The Happy Castle of Goblinburg’, complete with a Bear Witch, complex housing issues with blonde eyebrows, and a new inflatable puppet theater that talks.